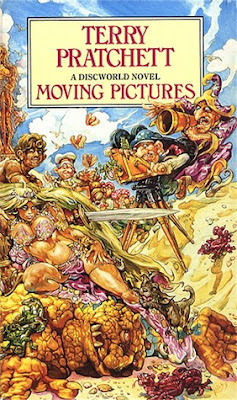 Moving Pictures is the tenth of Terry Pratchett's Discworld novels and the first of the so called "Industrial Revolution" works. It still retains a little of chaos and uncertainty in world building that characterises Pratchett's early Discworld. The main characters don't reoccur in other works, and other - more mainstream characters like the Wizards, form the background and are mostly played for comic purposes.

But Moving Pictures is an excellent early example of what Pratchett came to do so well. To take an aspect of our world, and transport it into comic fantasy. But because it is more free than the later works which were tightly bound into the framework that evolved over 41 books, Pratchett is able to play fast and lose with the story. The puns come fast and furiously, and all are glorious. These jokes and asides betray a deep knowledge of film history and the making of movies.

The story centres on Holy Wood. A dark place were ancient species lurk, held back by powerful magic. When the protection fails, dangerous ideas enter into the heads of the Discworld locals. Suddenly they want to tell moving stories on an illuminated screen, and lead the mesmerised viewers too a horrific fate.

The lead characters, Victor Tugelbend and Theda Withel are clearly meant to be Rudolph Valentino and Ginger Rogers, though there is at least one reference to Marilyn Monroe. Victor rescues Theda, over and over again until they are "stars" before anyone knows the reference. Moving Pictures introduces at least one important Discworld character Gaspode the talking dog, and CMOT Dibbler has his biggest role in the series here. He is also the cause of the biggest running joke in the book. Though there is a bit of Pratchett genius in his reversal of the traditional telling of King Kong.

Moving Pictures is unusual in another way. The ending isn't particularly happy. We, the reader seeped in Hollywood romance, expect Victor and Theda to have a happy ending, but that's not quite so clear. In fact the ending is a little underwhelming, but fits the darker mood of the overall book. The book also does well to critique the greed and exploitation of Hollywood, not least through some rather clever references to real life figures.

It has been many years since I read this Pratchett and I actually picked it up after reading a history of more recent movie making shenanigans. I enjoyed it this time round, though it doesn't have the same returning power as some of Pratchett's more mature works. Nonetheless its clever and packed full of laughs from a period when Discworld was less industrial and more magical.

Posted by Resolute Reader at 9:50 pm