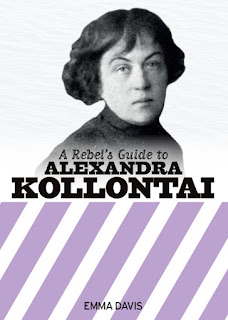 Alexandra Kollontai was one of the most fascinating and inspiring revolutionaries of the 20th century, yet today she is almost unknown. So it is marvellous that the latest in the excellent Rebel's Guide series is a short introduction to Kollontai's life and politics.

Born into the "progressive" aristocracy in Russia in 1872 she was unorthodox from a young age. She recalled she "criticised the injustice of adults and I experienced as a blatant contradiction the fact that everything was offered to me whereas so much was denied to the other children". Sent to Paris by her family who hoped it would distract her from an unsuitable marriage to an engineer, she discovered the works of Marx and Engels and began a lifelong commitment to revolutionary organising.

Key to Kollontai's life was the Russian Revolution and the politics of Lenin's Bolsheviks who led the workers to victory in 1917. Emma Davis describes who Kollontai's life was intertwined, even when living in exile, with these revolutionary politics. In particular Kollontai was one of the few who resolutely opposed World War One. Her 1915 pamphlet Who Needs War? was printed in millions of copies to agitate among workers and soldiers against the conflict.

But the most important aspect of Kollontai's activism and writing was her work on women's liberation and her development of ideas linking sex and society. Kollontai was a radical part of the women's liberation movement, but because she insisted that this movement had to recognise the class nature of women's oppression she was frequently at odds with the movement's middle class dominated leadership. This understanding of class also shaped how she understood sex. Following Marx and Engels she saw "bourgeois love" as arising out of the alienating nature of life under capitalism, and that relationships were both a solace and source of confrontation for workers. Davis quotes Kollontai:


Man experiences this 'loneliness' even in towns full of shouting, noise and people, even n a crowd of close friends and work-mates. because of their loneliness men are apt to cling in a predatory and unhealthy way to illusions about finding a 'soul mate; from among the members of the opposite sex.

But even attempts to challenge this through "experimental relationships" were doomed under capitalism, because as Davis explains, Kollontai thought


women were still subject to double standards. Men had a certain freedom to act without moral judgement from society; women did not. So Kollontai was scathing of those middle class proponents of 'free marriage' or 'free love' (having sexual relationships without the ties of marriage or partnership_ in the her and now who didn't recognise the inequalities of class and gender.

Women were at the forefront of the Russian Revolution of 1917. Kollontai, who by then was on the leadership of the Bolsheviks, became responsible for advancing women's liberation inside the new society. Revolutionary newspapers aimed at women were produced and Kollontai drove forward attempts to collectivise the production of food and childcare. She, alongside Lenin, challenged the fears of some that this was about the state taking away children, showing that this was about freeing women from the primary burden of childcare and reproducing the family. It is perhaps these sections of the book that are most inspiring as we learn about radical attempts to transform society, in the midst of appalling counter-revolution and civil war. Davis explains:


In her role of Commissar of Social Welfare Kollontai helped to write the groundbreaking decrees that opened the way for liberation. Hereditary laws were abolished, as was the authority of men in the family. Divorce was legalised and the distinction between 'legitimate; and 'illegitimate;' children was removed. Marriage ceremonies were simplified so any man of 18 and woman of 16 could marry through a short civil ceremony. Kollontai and Dybenko were the first couple married under the new law.

Given how backward pre-Revolutionary Russia was, these were amazing transformations. But the rise of Stalin and the isolation of Russia meant that these victories were rolled back. Sadly, as Davis shows, Kollontai was unable to break completely from Stalin and ended up in the 1940s praising his celebration of motherhood and traditional women's roles. But as Davis stresses, the key thing to remember about Kollontai was her revolutionary activism and organising in the run up to and during the Russian Revolution. As Davis says, "Kollontai's writings on sexual liberation point towards a world where people's relations... are free from the obligations of economic necessity."

This Rebel's Guide is an excellent introduction to Kollontai's life and politics. I highly recommend it and hope that Emma Davis' book leads to many more activists and revolutionaries learning from and developing Kollontai's revolutionary socialism.