Rachel Carson - The Sea Around Us 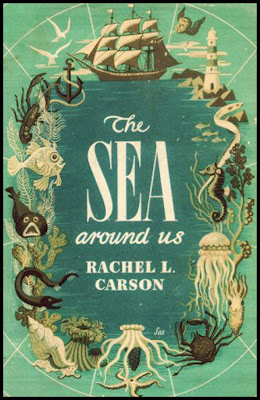 Rachel Carson's The Sea Around Us is nothing less than a complete history of the oceans and an study of the sea's human and non-human ecology. Part of her sea "trilogy" it was first published in 1951 and became a bestseller, cementing her place as an author and leading scientist. Today Carson is mostly remembered, rightly, for her wonderful work of ecology Silent Spring. But it was in these earlier books that she first demonstrated the talent she had for describing complex scientific concepts for the lay person, and let me emphasis the beauty and clarity of Carson's writing in The Sea Around Us.

The Sea Around Us begins with the history of the oceans, then looks at the way the sea is, from top to bottom. For an audience mostly unfamiliar with the deeps, then only just being explored by deep sea explorers, it is an insight into an unknown world. We learn about some of the creatures that live in the deepest parts of the oceans and how their habitats are shaped by the upper reaches of the oceans. Carson also explains the tides, the waves and the currents - and there's a lovely illustration of the Gulf Stream.

Interestingly for the contemporary reader Carson also includes some material on changes caused by melting ice caps and warming oceans. She doesn't ascribe them to global warming - no one did then. But she does consider what these changes might mean. She sees them as part of wider cycles of the Earth's systems.

Unfortunately for the reader today, there are significant problems with the book. It seems incredible today that when Carson was writing significant parts of geological science were not known. So she lacks any knowledge of plate tectonics, so cannot adequately explain the history of the oceans.

It would be churlish to dismiss the book for science that came after Carson's time, and its important to say that there is a great deal of interest here. So the book is far more than a historical curiosity. Modern editions often have an introduction updating Carson's work and the interested reader would do well to hunt these down. Most of all I enjoyed reading The Sea Around Us because it is such a wonderful example of how scientific writing need not be dull, or weighted down with figures, but can be poetic and accessible. I'm not surprised it was such a bestseller, and readers today will still get much from it.

Posted by Resolute Reader at 10:31 pm