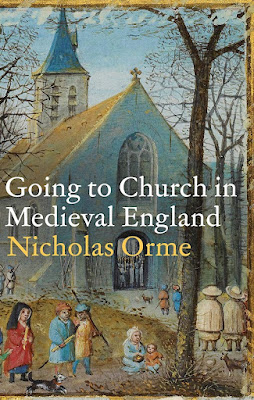 Despite my avowed atheism, I find churches fascinating. Travelling in the countryside I find myself drawn to the churches that usually form the centrepiece of villages. They are historical records, and while today they rarely have the congregations that they had in the past, they remain links to the distant past. Their memorials, burial stones, records and, frequently, their very structures are testament to the lives of people who lived nearby and worshipped there. When I wrote about the history of rebellion in the countryside in my book Kill all the Gentlemen I frequently noted how churches formed the basis of rebellion - as places to meet, to debate and sometimes as sparks of rebellion. The history of the Reformation in particular was, I argued, a process of change that sometimes drew people into direct conflict with their rulers.
So I was tremendously excited to receive Nicholas Orme's new book Going to Church in Medieval England. It is nothing less than a deep exploration of the custom and practice of religious worship in the period leading up to the Reformation. Orme begins with the parish, the geographical structure that forms the basis for the local Church's influence and the component part of the wider Church's structure. The basis for its taxes and its congregation. He emphasises that a church and its parish "were more than a religious unit... being also a social one", the social unit "might precede the church, if the church was built to serve an existing estate and community". The parish had a wider social impact though "Congregations understood themselves as different from those in parishes next door, and sought to equal or surpass in their own buildings what others had in theirs".
From the parish, Orme moves on to the staff of the church, their roles, their backgrounds and training and their knowledge. Then we explore the buildings themselves. What did they look like? Why are they usually certain shapes? How and why did those shapes change? Why were certain things in special places. We learn some surprising things - originally there were no seats and the seating that was eventually introduced were an example of the congregation shaping the church, not the other way around. People needed somewhere to sit, though the seats themselves frequently became cause for confrontation and disorder. Who should sit where?
Which brings Orme to the congregation. Most people went to church, but not all went all the time and for many their attendance fit around their wider lives. Orme shows how different aspects of the Church's calendar were designed in part of try and encourage attendance, though there was official recognition that some people might not be able to attend services that were otherwise compulsory - shepherds or fishermen couldn't miss their work, even on a Sabbath. Orme is adept at drawing out real experiences from a wide variety of sources. Take his description of children in church. Once they reached adolescence (12 for girls, 14 for boys) attendance in church became required but,

Notwithstanding this exemption, some children certainly came to church or were brought there... Parents took small children with them because they could not be left at home. The author of Piers Plowman used the simile 'as chaste as a child that in church weepeth'. Noisy or restless young children in church sometimes caused annoyance, as they do today. A visitation of Lincoln diocese in 1519 heard complaints... that 'children there make a noise indecently, so it is hard to hear divine service', while at Kimpton, Hertfordshire, infants 'laugh, cry and clamour'. Some adults might event condone the noise like Thomas Leyk of Gosberton, Lincolnshire who 'impeded the service with an infant'. Other parents left their toddlers at home, either from embarrassment or in order to escape for an hour, a practice which came to light when it led to fatal accidents.

This a good example of Orme's style and attention to detail, and in fact the best part of the book is when it explores the real people who worshiped in the churches and how their religious lives interacted with their actual lives. Orme approaches this in two specific ways. Firstly he shows the relations between the church and the seasons, the way services change in different times of the year - most obviously Easter and Christmas, though these were very different festivals. Secondly he links the church to the lives of its congregations - its presence at their births, marriages and death.
Orme doesn't pretend that everyone went to church all the time and some people never did. He also doesn't portray the church as perfect or its clergy as unfailing. People are punished, or behave badly - people gossip in church or show off hunting birds or flirt with the opposite sex. But this is very much a church "for life and death".
I loved reading this book. But I did feel it had somethings missing. I don't think the book got to the heart of what its congregation thought. Orme meticulously documents how the church functioned - what the priest did, and when. He takes us through how services changed and how their meaning changed. But I wanted to know a little more about what people actually thought. Did they really believe that God was present? How did they feel when the priest spoke words of Latin they didn't understand? What did they really think about the religion they were said to believe in? Of course this is difficult even when discussing practice, as Orme acknowledges :

The services that accompanied the life cycle may be well understood, thanks to late-medieval copies of the manual with their detailed prescriptions for baptism, churching, marriage and burial. Yet here too there is a disparity between what the Uses prescribe and what probably happened. More, sometimes less, took place than they describe on days such as Ash Wednesday, Palm Sunday, Easter Day and St Nicholas Day. The services of the life cycle must also be envisage in a context of popular observances that have left much less in the record, such as church decoration, procession...and feasting and gift-giving afterwards.

We don't even really know how long services took, as clocks only came into use after 1400.
I was particularly disappointed that Orme didn't discuss some significant events like the Pilgrimage of Grace in 1536 or the Prayerbook Rebellion of 1549. This is not solely because these are subjects of great interest to myself, but because they are events closely linked to religious, economic and social changes. These movements give great insights into how people viewed their church and religion. Sadly Orme only mentions 1549 in passing and wider peasant revolts are dismissed in a few words.
Orme's book certainly draws out how religion played a dual role in peoples lives. As part of the structure of rule by the upper-classes and as support and solace for people through their lives. For instance, Orme shows how class divisions played a role within the church space, as well as in the wider social context of the church. I was frequently left wondering whether the book could have explored this further though. At times I felt Orme portrayed the medieval church as essentially benevolent, with congregations happily following their local priest. I'd have liked more on dissent - and not just religious dissent. What happened when people refused to pay their tithes? Did people disagree with sermons? Did the congregation round on a few badly behaved attendees?
On the other hand this is a remarkably detailed book, and, it must be added - a beautifully produced one. There are lavish full colour pictures, plans of buildings and a lovely cover reproduction of a painting by Simon Bening from ~1550 showing peasants (and their dogs) trooping to a church (though readers ought to note it depicts a Flemish scene). Those wanting to understand what happened in a English church and how people worshipped will get a great deal out of this enjoyable work. Perhaps there's more to say about what they thought too - but that may well be another book.
Related Reviews

Duffy - The Stripping of the Altars
Duffy - Voices of Morebath
MacCulloch - Reformation
Wilson - The People and the Book
Tawney - Religion and the Rise of Capitalism
Posted by Resolute Reader at 9:20 pm