Ian Angus - Facing the Anthropocene: Fossil Capitalism and the crisis of the Earth System 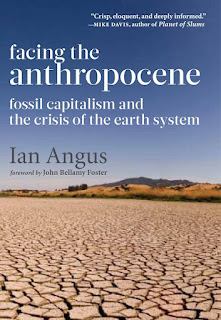 It seems that on an almost daily basis we read reports that climate change is getting worse, faster than expected. Only a few months back in the aftermath of the Paris climate talks in December 2015, politicians were hailing the successes of the negotiations. They claimed it was a major step forward. Yet little concrete action has taken place, and many of those who protested and called for serious action from the politicians, will be asking "what has changed?".

Ian Angus' new book is an extremely important contribution to this discussion. The last two decades have seen science take great steps forward in how we understand "the Earth System as a whole. A central result of that work has been realization that a new and dangerous stage in planetary evolution has begun - the Anthropocene."

A recent Guardian article quoted a climate scientist saying that "we are catapulting ourselves out of the Holocene". The Holocene was the geological era when "a stable and predictable climate" made agriculture, and hence human civilisation, possible. The instability of this new epoch threatens all of that.

The concept of the Anthropocene has in recent years become increasingly popular. Its the idea that we have entered a period when human activity itself is transforming the world in fundamental ways. There are important and extensive debates about when the Anthropocene began, and Angus' summarises these, sometimes complex, scientific discussions well. but they are not abstract debates, because they inform the argument about what must be done to deal with the environmental crises that we face.

Humans have always altered their environment. This fact alone has led some to argue for an "early Anthropocene". This is a mistake, says Angus, because it allows some to argue that what we are experiencing today is merely the "acceleration of trends going back hundreds and even thousands of years". But there is a qualitative and quantitative difference between what we are doing to the environment today and what has happened in the past.

What is it about those recent decades that have made things so much worse? The answer, argues Angus, is capitalism. He writes:


Capitalism and fossil fuels have spectacularly expanded human health and wealth for two centuries. Now they are overwhelming the planetary processes that have made Earth hospitable to civilization and our species for 10,000 years. They are thrusting us into a new and dangerous epoch.

Angus locates this dramatic change in the years following World War Two. In twenty-four graphs of earth system and socioeconomic trends, Angus shows how society's impact on the world makes a qualitative leap around the 1950s. From the emissions of carbon dioxide, marine fish capture and methane emissions to the manufacture of large dams and the use of water, paper and fertilizer there are leaps upward in the 1950s. Angus isn't the first to suggest the end of the war as the turning point, but what he does here is to explain why it happens, arguing that US economic interests were able to shape the world towards an increased dependence on fossil fuels, particularly oil, during and after the war.


At the beginning of 1950, four key drivers of the long boom were in place: a powerful industrial base in the US, .... a large and growing military budget; a disciplined and financially secure labor force... and a seemingly infinite supply of cheap energy.

This drove forward a new era in the relationship between human society and the natural world. In particular, neo-liberalism further undermined environmental legislation, expanded into new parts of the world and destroyed, or reshaped, industry and agriculture in its image accelerating environmental destruction. We are now in a situation of enormous urgency:


We do not know how long we have, but we do know that we simply cannot wait. And we know that just fighting isn't enough: to succeed, we must simultaneously work for immediate changes and advance a vision of the world we want to build.

Its worth highlighting one particular chapter when Angus discusses the crisis of ozone depletion in the 1970s and 1980s. It is one I well remember, and the story is important because it demonstrates how difficult it is for capitalism to do something about climate change. Angus explains how CFC manufacturers responded to criticism of the role of their product in destroying the ozone layer with denial and falsehood. It was only because it turned out that replacing CFCs with other chemicals was actually profitable that major companies ended up supporting a ban. But, as Angus concludes, this will not reoccur with the current crisis of climate change because dealing with fossil fuels means a "decades long transformation of the global economy".

One of the great strengths of this book is that it links an argument about the nature of capitalism with a powerful argument about how movements can fight. In particular Angus argues that the radical left must engage in and build the environmental movement today. If we can't stop fracking or a pipeline, he argues, how can we argue to overthrow capitalism?

In the introduction to his book, Angus says that he is trying to link the advances in Earth Systems science with the insights that a new generation of Marxists have brought to understanding capitalism's relationship with nature. He critiques those on the left who argue that the Anthropocene offers us little insight because it doesn't blame capitalism, or because it suggests that all humans are to blame rather than those at the top of society. What Angus points out is that scientists in debating the Anthropocene understand perfectly well that we are not all responsible for environmental disaster, and "insisting on a different word... can only cause confusion, and direct attention away from far more important issues".

By starting with the science and linking it to a Marxist understanding of capitalism and society's metabolic interaction with nature, Ian Angus has written an important book that will help to strengthen and develop the left's understanding of these issues. It ought to be widely read.