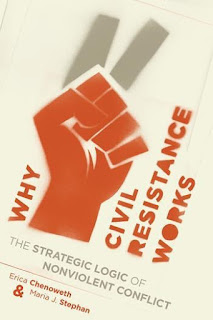 The question of non-violent social change has once again become a major focus of discussion within social movements, in particular because Extinction Rebellion in Britain have argued that non-violent civil disobedience is the only viable strategy to force governments to enact the changes that will enable society to reach zero-carbon by 2025.

In their theory Extinction Rebellion have placed central importance on the work of Erica Chenoweth, an academic and researcher at, among other places, the Peace Research Institute of Oslo. Why Civil Resistance Works is her most significant publication, jointly written and researched with Maria J. Stephan a "strategic planner with the US Department of State". In the book the authors attempt to show how and why non-violent civil resistance works and argue that no other form of action is as successful.

As a revolutionary socialist I must admit to beginning the book expecting to significantly disagree. This is not because socialists favour violence above all else, but because the crude summaries of Chenoweth's work that I had heard and read, mostly in the new British environmental movements, had led me to be sceptical. While I finished the book unconvinced of the authors' arguments I found them much more nuanced that expected, and there is material here that is both important and interesting.

The authors' central argument is quite straightforward: "The most striking finding is that between 1900 and 2006, nonviolent resistance campaigns were nearly twice as likely to achieve full or partial success as their violent counterparts." Their detailed statistical arguments show that:


Among the 323 campaigns, in the case of anti-regime resistance campaigns, the use of a nonviolent strategy has greatly enhanced the likelihood of success. Among campaigns with a territorial objectives, like anti-occupation or self-determination, nonviolent campaigns also have a slight advantage. Among the few cases of major resistance that do not fall into either category (anti-apartheid campaigns, for instance), non-violent resistance as had the monopoly on success. The only exception is that nonviolent resistance leads to successful secession less often than violent insurgency.

It is important to note that the authors do not claim that non-violent resistance always wins, or that violent campaigns don't/can't win. They argue that non-violent strategies are most often successful.

The main explanation they have for this is that "non-violent campaigns have a participation advantage". In other words, it is harder to get people involved in campaigns (eg terrorism) that are likely to lead to their death or injury. Also non-violent strategies tend to create moral situations which encourage participation, or help to portray the opponent as amoral, particularly if the respond with violence. Finally, it can be harder (though by no means impossible) for an enemy to unleash violence on a non-violent campaign. The consequences of this, the authors write, is that mass non-violent campaigns can create the sort of situations that are likely to win - encouraging foreign support, encouraging regime supporters to break away, or helping to turn soldiers or the police onto the side of the protesters.

The authors then continue by arguing that not only are non-violent campaigns more likely to succeed, but that the "transitions that occur in the wake of successful non-violent resistance movements create much more durable and internally peaceful democracies than transitions provoked by violent insurgencies".

None of this is particularly surprising or disagreeable. I also, for fear of seeing crude critiques of Chenoweth and Stephan follow from this review, want to note that they do highlight situations where there are differences to their general case. For instance, they write, "It is worth noting that there are some important deviations from our assumption that violence campaigns attract only limited numbers of participation" and continue by listing the Russian, Chinese, Algerian, Cuban and Vietnamese revolutions.

So what did I think? Well I think there are a few issues that arise from the book. Firstly the question of violence itself. Often campaigns and movements adopt non-violent strategies for moral reasons. But the violence that Chenoweth and Stephan talk about is usually terrorist or guerrilla warfare. They aren't really considering situations where a few windows get broken as part of a much bigger demonstration, or where during a mass, non-violent protest strike or stay-away, a group of protesters might injure or kill a policeman. In fact, in many cases, the authors note that these sort of incidents did occur but class the movements as non-violent.

The problem is that most contemporary movements that argue for these strategies are not arguing against terrorism as a strategy, but arguing that no sort of violence is permitted - which can lead to problems when, for instance, understanding the role of the police, or considering whether to resist arrest. This isn't a criticism of this book, but of some of those who claim to follow its teachings.

Secondly we have the question of aims. The book has four major case studies that it examines to understand the authors' thesis practically - the First Intifada (1987), the Iranian Revolution (1979), the Burmese Uprising (1988) and the Philippine People Power Movement (1983-186). The case studies are themselves quite interesting. But they are limited. For instance, despite the close arguments of the authors I struggle to see the First Intifada as a non-violent movement, though I appreciate it was much more than stone-throwing. Secondly the discussion of the Iranian Revolution focuses on the movement that ousted the Shah, but neglects the role of mass workers movements in almost reaching a point when the question of workers' state power was on the cards.

In fact, when it comes to aims, the authors really judge success through the lens of bourgeois democracy. So the First Intifada is considered a partial success because it led to the recognition of the Palestinian Authority, despite the fact that the Israeli occupation still continues today and that Palestinians are still violently oppressed. The Iranian Revolution was a success because it brought down the Shah, but what came afterwards was hardly a victory for the oppressed masses. Other classic non-violent movements such as the American Civil Rights movement and the anti-Apartheid movement are considered successful, despite the ongoing existence of state racism in the United States and the extremely unequal reality of contemporary South Africa (indeed their active violence against workers).

The case study of the Iranian Revolution is also of interest because the authors make clear that it was the very possibility of the use of violence against the old order that helped the new regime to victory. As they themselves note the Ayatollah almost issued a declaration of Holy War, but stopped short.

Thirdly I think the approach of the authors that "the way a transition occurs predicts the way that the new regime will rule". Here the obvious example is the Russian Revolution, which they decry as a violent movement whose violence originated with the revolutionaries. They note the civil war that followed, but this was, of course, caused by the intervention of the old bourgeois order and the imperial armies of the capitalist nations who wanted to crush socialism as quickly as possible.

The problem is that the authors are not considering the sort of movement that can end capitalism. In order for that to take place, the capitalist state must be defeated. While it is certainly true that powerful mass movements and strikes can lead a movement to the point when the question of state power is in the balance, these are not enough to actually seize state power. That will require the use of force (though we should note that this is not the same as violence). The insurrection of October 1917 was relatively bloodless in Petrograd because of the scale and discipline of the movement. This was not as true in Moscow where the Bolsheviks were not as embedded in the working class. But the violence of the revolutionary year of 1917 arose, by and large, out of attempts to limit or stop revolution - though it should be said that centuries of oppression and exploitation did mean that when the workers and peasants rose, unsurprisingly they did enact revenge.

It is entirely possible to bring down governments, end unjust laws, or enact change through movements that are non-violent. But the key thing here is not actually non-violence, but a mass movement, particularly one where the economic power of workers is deployed through strikes and stay-aways to undermine the existing authorities (I was very pleased that the authors repeatedly note the importance of strikes). An attitude of non-violence on the part of the movements can help to encourage participation, but fetishising it can undermine the movement when violence is deployed against it. If the question of state power is to be considered, then non-violence will not be enough.

In conclusion then, I found this book stimulating in its discussion of social movements, but limited because its authors saw change solely through the prism of bourgeois democracy. Though I am never convinced that applying mathematical models to such movements is viable. They also rarely discussed the type of single-issue movements that their main exponents today are part of. In fact, when considering the battle to stop environmental destruction today, the question of state power is very pertinent. Everywhere fossil capitalism survives with the support of the capitalist state. Getting to zero-carbon by 2025 means challenging the state. But as Leon Trotsky wrote in his writings on Britain, the question of state power is one that inevitably brings with it the question of force:


In preparing to take state power it is thus necessary to prepare for all the consequences that flow from the inevitable resistance of the possessing classes. It must be firmly understood: if a truly workers' government came to power in Britain even in an ultra-democratic way, civil war would become unavoidable. The workers' government would be forced to suppress the resistance of the privileged classes... A truly Labour government, that is to say, a government dedicated to the end to the interests of the proletariat would find itself in this way compelled to smash the old state apparatus as the instrument of the possessing classes and oppose it with workers' councils. That means that the democratic origin of the Labour government... would lead to the necessity of counterposing revolutionary class force to the reactionary opposition.

Extinction Rebellion and other activists make much of a figure from Erica Chenoweth that says that movements that involve 3.5 percent of a population in a sustained non-violent campaign fail. This conclusion is not in this book, but is based on further study of the data that the book is based on. You can read more on that here.

Ahmed - Mohandas Gandhi: Experiments in Civil Disobedience
Molyneux - Anarchism: A Marxist Criticism
Extinction Rebellion - This is not a Drill
Harman - Revolution in the 21st Century
Posted by Resolute Reader at 9:22 pm