Seb Falk - The Light Ages: A Medieval Journey of Discovery 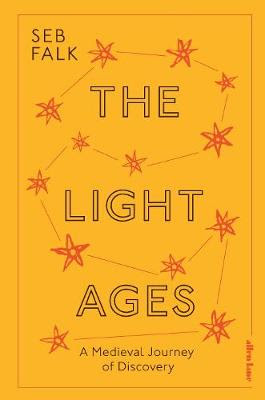 When I learnt history at school we understood the "Dark Ages" as a period when little happened. The Romans had left England and there was an essential collapse into chaos and barbarism. Everything, from the towns and the economy, to education and agriculture stagnated at best or even went backwards. Today these views are a lot less common, but you still find it expressed in TV series, news reports or popular history books.

So it is wonderful that Seb Falk has written this new history of the science of the "Dark Ages" and quite rightly, relabelled them the Light Ages. Falk tells the story by telling the story of the monk John Westwyk who spent much of his life at a monastery in St Albans. Little is known about Westwyk's life, but Falk draws out the little we know. However the key material centres on the writing that Westwyk did, particularly his work in describing and transcribing texts that discuss how to use key astronomical instruments of the time - particularly the astrolabe. Westwyk also designed, though never built, a complex instrument called an equatorie.

In telling this story Falk draws out the deep scientific knowledge of the times. One important aspect to this is Falk's discussions of astrology. Today there is a tendency to dismiss astrology as being unscientific - that is absolutely correct. But in the Middle Ages astrology was a key part of much wider knowledge. The positions of stars, planets and the sun and moon, were considered a key part of medicine, agricultural knowledge, navigation and weather prediction. So Falk explores the contemporary knowledge of the how the planets, sun, moon and stars moved and how to predict and time events. It is remarkable how detailed this knowledge was and time and again I was surprised by the expertise of the monks who wrote and taught this material. As Falk jokes about his own book - if the reader finds some of the trigonometry difficult in the book, then they'll realise that medieval people were not stupid.

Another aspect to this is the exchange of ideas. Firstly monks like Westwyk drew heavily on the work of scientists from across the world - in particular figures like Aristotle and Ptolemy - as well as writers from Asia and the Middle East. Readers might be surprised at the extent to which Christian monks respected the work of Muslim and Jewish scholars. There's a popular idea that monks in the Middle Ages simply copied verbatim, knowledge from the past. But as Falk shows these copies were updated, annotated and corrected by those who copied.

When Westwyk copied one scientific document the Albion treatise,

he added two pages of his own commentary about the relationship between Richard's [original author] compendious invention and some of the older instruments it incorporated. The first of the was the saphea of Arzachel... [who] worked in Muslim Al-Andalus in the late eleventh century, first in Toledeo and later... in Cordoba. He was a prolific astronomer, compiling user-friendly tables and developing new theories to account for long term changes in the motions of the Sun and stars.

Copies of books were circulated, borrowed and shared - though the work required skill, time and money. There was also extensive travel. John Westwyk began at St Albans, he travelled to Northumberland for several years, joined the Bishops crusade and likely also attended university. The idea that "science" or "knowledge" in these times was stagnant or limited to a small number of people is simply false.

That said, Falk makes clear that medieval science was not science as we know it. In fact the role of science and knowledge, as well as instruments like the astrolabe, was also about illuminating society and the positions of people within it. As he explains:

The astrolabe was a key to understanding - understanding both God and yourself. If Nature was a book which, like Scripture, contained clues to the divine plan, and if the world sphere, as Sacrobosco said, was a machine, then in the intricate movements of a man-made celestial machine you could find clues to the craftsmanship in Creation - a windows in to the mind of God. Moreover, studying the astrolabe could help to find your place in the world, not merely geographically, but existentially too... Medieval science... was artificially separated from Subjects that dealt with moral questions. Degrees of altitude and social status shaded subtly into one another.

Chaucer's treatise on the astrolabe was "not even just a general astronomy textbook. It was part of an all-round education". In this vein, the design of the Albion instrument was intended to "direct the minds of many people to higher things".

In trying to summarise the key points of Falk's book here I have neglected much fascinating detail. There is an amazing section on the design and manufacture of medieval instruments, as well as a step by step guide to using an astrolabe - though this is a little difficult to follow. Falk spends a great deal of time explaining precisely what the monks were trying to understand about the universe, and how this information was passed on - including the spectacular mechanical clock that was built at St Albans.

Seb Falk's book is fascinating and illuminating. It is also a beautiful work. Lavishly illustrated with colour plates and many diagrams that clarify the text and the mathematics, this book should be on the shelf of anyone who is interested in the history of science and the middle ages. I highly recommend it.

Wickham - Medieval Europe
Gimpel - The Medieval Machine
Bolton - The Medieval English Economy: 1150-1500
Bloch - Feudal Society
Miller - Empire of the Stars
Panek - Seeing and Believing
Holmes - The Age of Wonder
Hewitt - Map of a Nation: A Biography of the Ordnance Survey

Posted by Resolute Reader at 7:21 pm