Richard Holmes - The Age of Wonder 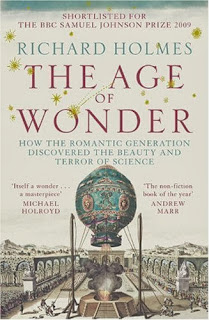 The end of the 18th and the beginning of the 19th saw an explosion in scientific and technological development. It is during this period that the foundation for modern science was laid.

Richard Holmes' book is an extraordinarily enjoyable and informative exploration of this time. He tells the story of the "Age of Wonder" through the interlocking lives of several great scientists. Framing the story is the life of Joseph Banks, who in 1796 arrived in Tahiti, a young biologist setting out to explore those "utopian" islands. What Banks found there, apart from the love and passions of a young man, helped put start him on a lifetime of encouraging exploration and science wherever he could.

Banks was one of the most important presidents of the Royal Society. During his time, he encouraged many young scientists, finding funding, introducing them to each other and sharing knowledge, expertise and on occasion equipment. Through Banks, we are introduced to many of the other great scientists of the time. Humphry Davy who radically transformed safety in coalmines and made many discoveries in the fields of chemistry and physics. William and Caroline Herschel who transformed astronomy, not simply through their discoveries, but also through their methods of systematic observation, their invention and manufacture of new equipment and their scientific theories. Holmes also tells us about the technological "fads" that followed on the back of new discoveries - the first balloon flyers and the sudden thirst for African exploration.

But this is more than the story of inventions and scientific endeavor. Holmes interweaves the stories of these scientists with changing cultural and social ideas. Here, for instance, he shows how William Hershel's "nebulae hypothesis" for the formation of stars, was developed further by Pierre Laplace. Laplace extended this hypothesis to the formation of the solar system in a 1799 book.

"In effect he reasoned that the sun had slowly condensed out of a nebulous cloud of stardust, and then spun off our entire planetary system, just as in a thousand other star systems. THere was no special act of Creation. In this way he was able to give a purely materialist account of the creation of the earth, the moon and all the planets. No divine intervention or Genesis was required, nor was it visible anywhere else in the universe."

Science was challenging some of society's most fundamental ideas. Sometimes the scientific revolution was allied with, or came close to political revolution. Humphry Davy told an audience at one of his amazingly popular lectures, after demonstrating primitive electrical experiments, that they witnessing;

"a new influence... which has enabled man to produce from combinations of dead matter effects which were formerly occasioned only animal organs".

"The guardians of civilization and of refinement, the most powerful and respected members of society, are daily growing more attentive to the realities of life, and, giving up many of the unnecessary enjoyments in consequence of the desire to be useful, are becoming the friends and protectors of the labouring part of the community."

Despite his revolutionary science, Davy wanted no significant change from the status quo, "the unequal division of property and of labour...are the sources of power in civilized life, and its moving causes, and even its very soul". Not for the Royal Society would their be any taste of the French Revolution, for this was a period when science was being bent towards the pursuit of industry, and if the scientists thought that would bring a better and more rational society, that that was good. Davy's lamp undoubtedly saved the lives of thousands of miners across Europe. It also helped the mine owners continue to exploit their workers in the most appalling of conditions.

But this is not a just a tale of science and industry. The book is littered with quotations from poets and authors. Davy's enthusiasm for electricity, helped inspire Mary Shelley to write her most famous novel. But other scientists, like Herschel, inspired the other Shelley. In Prometheus Unbound, Shelley explores "Herschel's new cosmology and Davy's chemistry";

Then see those million worlds which burn and roll
Around us; their inhabitants beheld
My sphere'ed light wane in wide heaven

There is much in this wonderful book to inspire further thought and reading. I was particularly struck by the brother and sister astronomers, William and Caroline Herschel. The later became the first woman paid to study science, their lives are fascinating and their discoveries immense. I hope to read more, particularly about Caroline who had to struggle against her own upbringing, as well as a society that didn't take kindly to women playing male roles.

If I have one criticism, it is that Richard Holmes doesn't locate the changing scientific world more clearly in a changing economic and social world. Capitalism was spreading rapidly through the world as demonstrated by the chapter on African exploration. It needed science and technology to further the accumulation of capital, to both understand the world, and tame it. The explosion of scientific and technological development in the period covered by this book has its roots in the scientific revolution that began with Newton and the early scientists. But a maturer capitalism needed a more systematic and professional science that could solve its technological problems and help the bosses make more money.

Nonetheless, this is a minor absence in a book that deserves to be widely read, by those who are interested in the biography and history of early scientists, as well as those trying to understand the origins of the modern world. Highly recommended.