Rachel Hewitt - Map of a Nation: A Biography of the Ordnance Survey 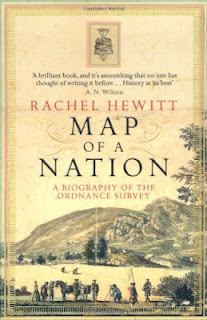 For those readers outside of the UK, the phrase "Ordnance Survey" will probably mean very little. But for millions of Britons over the years, the Survey has represented the maps and charts that we have used to find our way around the country. In particular, hikers, ramblers and climbers will know the garish pink covered maps that, in amazing detail, show the locations of windmills, ancient remains, monuments and public telephones, as well as mountains, roads and waterways.

It is easy to take this for granted, after all it is no surprise that nations have maps of themselves. From this point of view a history of the Ordnance Survey (and wider attempts to map the British Isles) might seem only of interest to a specialist readership. Yet Rachel Hewitt's book contains much of interest to those interested in the development of modern Britain, science and social history.

Hewitt begins with the failed Jacobite rebellion of the mid 1700s. The defeat of Charles Stuart at the Battle of Culloden led to "loyalist" troops hunting down the last of the rebels. They were hampered by a complete lack of maps. In fact, large areas of Scotland were not only very difficult terrain, they were also completely unknown to anyone but the locals.

For a developing nation this was an enormous problem. In addition to the military consequences the nation state also needed to know what it had in terms of resources, people and places. From these early beginnings the modern Ordnance Survey was born.

Hewitt ably traces the story of those early mapping exhibitions. The small groups of men who travelled though inhospitable terrain, measuring, drawing and noting the names of landmarks. Their equipment was rudimentary and their skills were new. Many of the earlier maps are closer to pictorial representations than the symbolic maps we know today. The accounts of the progress of the surveyors are fascinating.

A few individuals struggled to get national recognition, and eventually government realised the importance of the task. Yet it took almost a century before the first, full Ordnance Survey map of the country was finished.

Why did this take so long? It is illuminating that there was a full map of Ireland produced long before the whole of the England, Scotland and Wales. The South Coast was mapped repeatedly long before the mountains of Scotland. The reason for this disparity has everything to do with the needs of the growing British State. The South Coast was important because it was the most likely site of French invasion and understanding the location of strategic sites was crucial for the military. Ireland was Britain's first colony and the government needed to know its resources, people and places in detail. It is noteworthy that the "Great Trigonometrical Survey of India" was begun in 1817 and was well advanced by the mid-1840s, yet the final map in the first series of the British Isles (south west Northumberland) wasn't released until  1870.

One of the weaknesses of Hewitt's book is that she doesn't draw more of this out. In fact it is merely one element in an interesting story for the author, rather than a central theme of the story of British mapping. This is a shame because the story of the Ordnance Survey is one that illuminates the development of British capitalism. Capitalism brought together a particular method of organising production, one that needed incredible amounts of natural resources and people, as well as being incredibly dynamic in terms of scientific and technological development. All these elements are brought out in the story of the technological and social developments of the Ordnance Survey, yet they feel tacked on to Hewitt's history.

This is not to say that Rachel Hewitt's book is not a worthwhile read. She has collected an immense amount of forgotten history and tells a great story. It is one that interweaves William Wordsworth's poetry with the story of the determination of the distance between observatories in London and Paris. It mixes technological genius with stories of men camping for weeks on mountain tops in the hope of a clear day. Sadly this detail sometimes obscures the far greater story beneath.
Posted by Resolute Reader at 10:23 am

A very interesting review! I've never thought of the close relationship between mapping and British colonialism....as Ireland and India were colonized, the British had to make their maps so that they could grasp their resources. It's also interesting that mapping is related to the military and the birth of nation state. Before reading your post, a map was something I had to remember to get a good grades in geography and caused me a headache, but now this post gives me a different perspective! Thank you very much for an inspiring post!!

This sounds like a very interesting book and is now on my 'to read' list. Mapping is very much a part of how states exercise control. It is discussed in James C Scott's Seeing Like a State (1999) and there is an excellent case study of Thailand in Thongchai Winichakul's Siam Mapped (1997). Thanks for the review.