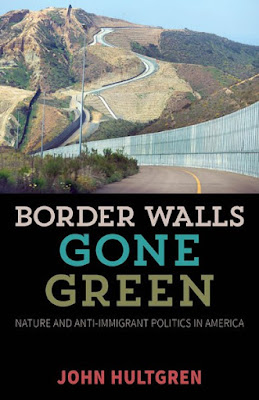 The growing climate crisis places a new importance on discussions around migration, refugees and immigration. The environmental movement has come late to these questions. But in recent years as the movement has begun developing an appreciation of the role of colonialism, imperialism and racism in the the environmental crisis, there has been growing awareness around issues about racism, refugees and migration. But as John Hultgren's important book shows, there are right-wing and racist approaches to these issues that link them to a different approach to nature. He also argues that particularly in the United States (though not limited to it) the dominant approach to nature opens up activists to a racist agendas. He writes:

This shortcoming is reflective of a broader theoretical lacuna in environmental thought: greens lack an adequate understand of the political terrain on which struggles over nature intersect with the norms, practices and institutions of sovereignty. As nature is increasingly being deployed in projects of boundary drawing.. a failure to grapple with this emerging form of territorialisation disables effective responses to 'environmental restrictionism' and opens up space for anti-immigrant logics to subtly influence well-intentioned greens.

Nature is not merely captured to advance exclusionary social agendas; it is commitments to certain conceptions of nature that give rise to such agendas. [Hultgren's emphasis].

From the late 1800s to the late 1930s an articulation between romantic and Darwinian natures intersected with a hegemonic, racial nationalism [in the US]  through a shared commitment to natural and national purity. By contrast, from the early 1940s to the early 2000s, the overt racial essentialisations present in the earlier wave of restrictionism were subsumed by a dominant neo-Malthusian nature that cut across an increasingly complex social terrain, enabling restrictionists to reinforce American sovereignty through the exclusion of immigrants, but provoking strong opposition in the process.

In contemporary discourse around climate change it is the question of the nation-state that dominates. The UN's COP process begins and ends with the idea that nations are responsible for certain amounts of emissions, and per-capita or national figures are quoted with abandon. The problem with this is, as Hultgren points out, is that this turns "socially constructed borders into natural facts" and excludes "ecosystemic or transnational" approaches. These approaches then inform wider understandings. Nature is associated with social conceptions like carrying capacity, or purity.

This can lead into an approach that blames immigrants for destruction of natural systems - because of racist beliefs about their behaviour or culture; or sees immigrants as only wanting to adapt to particular social norms which carry an associated environmental "foot print". Hence US anti-immigrant rhetoric sometimes takes the alleged per-capita emissions of an American and contrasts it with that of (say) an average Mexican. The implicit argument being that more immigrants mean more destruction. Finally immigrants are often portrayed by the right as being uncaring about the environment, in supposed contrast to white people.

We should not fall into the trap of believing these are just modern arguments though. Hultgren emphasises how historical approaches to nature coloured particular arguments around immigration. Eg the idea that humans are inherently destructive, or fears of unrestricted population growth leading to automatic resource shortages.

These historical sections are fascinating and lay the ground for the later chapters that look at contemporary right-wing ideas around nature/immigration in the US. But it is the contemporary sections that are likely to be the most useful to left-wing and environmental activists today. Hultgren explains that

social nativists depend on a variety of epistemological strategies that deploy nature as a marker of order supporting white political supremacy; however they are quite ambivalent in their dealings with nature as an intrinsically valuable entity.

He continues by pointing out that there is no reason that "social nativists" could not be green (in fact he goes on to show some anti-migration activists that definitely are). But because environmentalism is associated with "progressive, Democratic politics" there isn't likely to be a major shift towards this sort of politics from the right of the political spectrum. However he continues that there are sections of the right in the US that consciously have attempted to use debates around environmentalists to further their agenda. Writing about one activist, Hultgren says "he is an environmentalist wedded to a specific construction of nature that is itself embedded in exclusionary notions of nationalism, race and culture. These commitments to an nationalised and racialised nature have led him into activism aimed at securing American sovereignty from the supposed threat posed by immigration".

One thing that I took from Hultgren's book is that left activists need to constantly be aware of how debates around the environment and population can be used, and articulated by the right. But, more importantly, what Hultgren concludes is that environmentalism cannot succeed in defeating right-wing anti-immigrant (and I would extend this to over-population arguments) unless it adopts a critical approach that sees nature as intimately connected to social questions like racism, class, gender, colonialism and capitalism.

John Hultgren's book is an illuminating read for all activists today. His conclusion is worth quoting by way of encouraging others to read this excellent book:

The "wes" of an environmentalism of migration "are an evolving," but the immediate challenge is to confront the power of a dominant mode of sovereignty that operates through militarised neoliberalism, a form of power that depends on the continued construction of border walls. Resistance, then, requires a global alliance geared toward tearing down border walls of all sorts - including the green variety.

Readers interested in the question of climate change and refugees/migrants should read this article by Camilla Royle on Migration in an era of Climate Catastrophe.

Posted by Resolute Reader at 5:07 pm