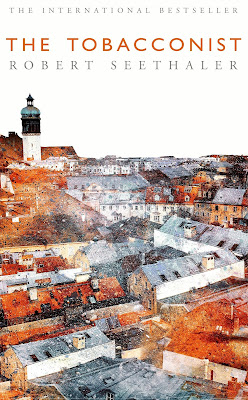 The first novel I read by Robert Seethaler was the whimsical and beautiful A Whole Life. In some ways The Tobacconist is a very different book, but like the previous work it deals with those complete experiences that serve to make a up a life.

It's 1937. Franz lives an idyllic, lazy life on the shores of a beautiful Austria lake. Insulated from the outside world by his home town's isolation and his youth, Franz suddenly finds himself thrown into a very different world as his mother's partner dies and they are short of money. Franz is sent to a friend of his mothers, the eponymous tobacconist who owns a booth in central Vienna. The elderly, one-legged, gruff Otto turns Franz into an experienced cigar salesman. At the same time, the naïve Franz begins to learn about the reality of the wider world as Hitler enters Austria.

The theme of the innocent, bewildered outsider entering the dark and gloom of the real world is not new. Seethaler handles it well, probably more so for his Austrian readers who might know more about the reality of Nazi rule in Vienna. For Franz though the graffiti, Gestapo and anti-Jewish boycott's are confusing - especially as he is himself distracted through falling in love for the first time. In a not to subtle nod to Freudianism itself, Seethaler links Franz's growing awareness of love and sex, with his developing understanding of the wider political world, through the character of Sigmund Freud himself. Franz repeatedly pigeon holes Freud as he struggles to understand his emotions of love and betrayal at the hands of a young woman. There's even a phallic cigar or two to ram the point home.

Otto's gruff exterior belays a deeper kindness - having lost his leg in the trenches of World War One, he's not prepared to forgo his own ideals. Serving Jews at the Tobacconist however draws the attention of local fascists and eventually the Gestapo arrive. As Freud is also forced from Vienna, Franz grows up remarkably fast and, inevitably, draws attention to himself. Franz's letters home to his mother, who he imagines remains in the bucolic countryside, actually show him that that world is also becoming corrupted. There seems to be no escape anymore.

It's a fine novel - compelling, intense and painful - and well worth reading, even if it didn't quite live up to Seethaler's earlier classic in this reader's mind.

Posted by Resolute Reader at 6:46 pm