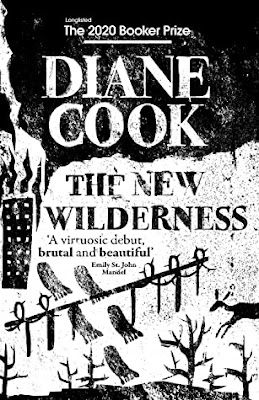 In some not so distant future, urban areas are over-crowded, polluted, violent and poor. The countryside has all but disappeared, rural areas being subsumed by ever expanding concrete. With one exception - the New Wilderness. Guarded by rangers, carefully monitored by drone and home to a small ragged band of randomly selected humans who are encouraged - forced even - to lead a hunter-gatherer lifestyle. The band wanders around gradually losing the equipment they brought with them, from station to station where they receive the occasional piece of post from the outside world and meet rangers who give them instructions, and fines for transgressing the rules of the Wilderness.

Its a compelling, if unbelievable scenario. Diane Cook's cast of misfits have to cope with a variety of problems - some environmental, but most social - and not all of them survive. Cook is clearly influenced by William Golding's Lord of the Flies, and this book combines elements of that story with more contemporary environmental disaster novels.

The problem is that the setup is interesting. But it falls apart because it is riddled with inconsistency and plot holes. For instance, there's no rational reason behind the "experiment". In fact the elements of behaviour by the group that would be of interest to any scientists studying them are actively discouraged by the rangers, under threat of violence. The author hopes to create an air of mystery but not explaining anything, but in reality it leaves the reader befuddled. Why would a state go to such lengths to create an elaborate version of hunter-gatherers, but do so little to make it work? In addition, the exceptions make no sense at all. Why would those under the experimental microscope continue to receive mail, and mail that includes baked goods, pieces of equipment and (in one case) a university's departmental minutes. It doesn't even appear to be an elaborate Survivor reality TV show.

But it's the inconsistencies that get the reader. Getting to the New Wilderness is so difficult that others make their way there, seemingly using underground networks to avoid the authorities. Yet one main character leaves the group, returns to her home (which despite references to resource shortages seems to be still available) and then comes back a few months later. The characters lose all track of time (one of the heroines doesn't know her age) but the band seems to have a good understanding of the seasons, moon and stars. The rules don't make sense. The nomads have to hide sweets, yet they get post that includes cake (how does it survive?). They are given illogical and inconsistent instructions by the rangers, who always hate them, but there's no explanation why. They are joined by a new group of ill-equipped, naïve volunteers who everyone expects to die, but none of them do. This new group of people have apparently been following news about the original nomads but haven't learnt any lessons - turning up in sandals and summer dresses with no equipment.

The central mother-daughter (Bea/Agnes) story barely works - not least because Bea behaves so irrationally. At one point I thought I understood the reason Bea randomly threw herself at the unpleasant and idiotic Carl was because she had concocted a clever power game with her beloved husband. In truth it seems the author wanted to, Lord of the Flies style, suggest that a powerful man is sexually attractive simply because of his power. The central message seems to be that people reduced to nothing will get on with each other only because they have to, but really would prefer to be alone.

This is a bad novel. It is illogical, irrational, unwieldy and unpleasant. Its characters behave irrationally and stupidly. How it got nominated for the Booker Prize I don't know. I'd recommend you avoid it.

Thanks for taking one for the team here!