Christopher Dyer - Standards of Living in the Later Middle Ages 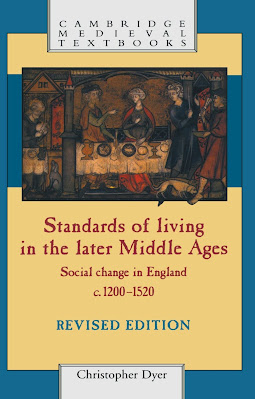 Despite being intended as a university text book this is a interesting and readable study of the living conditions of people in the English Middle Ages circa 1200 to 1520. What shines through first and foremost are the differences due to what Dyer calls the "enormous disparities between rich and poor". These, he emphasises, "were not an incidental by-product of economic activity but an inherent feature of society". Considering the ruling class, he writes:

The important characteristic of the aristocracy in any case was not the size of the income but the means by which it was obtained, that is by lordship. The bulk of their regular revenues came from land, most often rents and other payments enforced through rights of jurisdiction that were exercised in manorial courts.

At the other end of the economic (and exploitative) scale were the peasantry. Dyer takes the reader through the plethora of different types of peasants - from the free to the serfs - and the various types of holding and labour they had to do. While acknowledging that the period covered saw vast changes in types of landowning, Dyer notes that their communities were complex, but the peasantry did form a class. He writes:

We usually envisage the peasantry in three layers, of rich, middling and poor, by reference to the amount of land held... All of them, however, were involved in agricultural production, and had a stake in the common fields of their village. All belonged to village communities which in limited ways governed themselves. All paid rents or worked services, and were subject to the jurisdiction of a lord. Their involvement in acts of rebellion and resistance suggests a recognition of a common interest in the removal of restrictions and irksome dues. For these reasons the peasantry can be regarded as a social class.

As I said, class plays a key role in the book. One interesting nugget among many in Dyer's work is the relatively small numerical size of the upper class in the Middle Ages. He suggests that in England it amounted to a total of 50,000 people, about two percent of the population. This includes "20,000 monks, nuns and beneficed clergy" who lived of land revenues. No wonder they were so terrified of revolt from below. But the aristocracy in particular did not have it easy. We get a real sense of them struggling to manage their livestyles in the face of economic crisis and change - including events like the Black Death and plague. Dyer describes them as a "remarkably resilient and flexible class" prepared to change and adapt to maintain their position. They were also in constant change as different families lost personal or lands.

The aristocracy were judged by different standards today. Dyer holds an interesting discussion about a 14th century poem, Winner and Waster which shows the different aristocratic behaviours with wealth as having different roles - demonstrating wealth and power through spending, as well as holding society together through their ability to display restraint.

Returning to the other end of the scale, Dyer shows the difficulties in estimating the standard of living of the peasantry as their wealth was not recorded in estate accounts. In addition, he highlights how the changing roles of the peasantry within their own lives, makes it difficult to pin down exactly how people lived.

"There was no medieval proletariat" he explains, but "a high proportion of the population worked for others at some stage of their lives, and employers were numerous, including not just the wealthy gentry, clergy and yeomen, but also a wide range of craftsmen and peasants... As the unit of production was the peasant holding or the craftsman's workshop, few employees worked in a group large than two or three."

It was the slow changes in the later part of the period that began to upset the old order. Contrary to common belief (repeated frequently through the Covid-19 pandemic) the Black Death didn't simply lead to a quick rise in wages. "In fact the rise in wages was a first modest, and the striking improvement often came in the last quarter of the 14th century". Whatever the reasons, the employers felt a "deep sense of shock at the 'unnatural; demands of their servants". The "new deal for wage-earners" arose from a complex combination of different factors, but it did open up a new era of social exploitation. Nonetheless, Dyer emphasises that most people were underemployed through the period. This helps explain the peasant rebellions that took place after the Black Death, but also aspects of more personalised resistance, such as a constant changing of jobs for those who were able to. Perhaps its this, in the aftermath of the Black Death, that made the biggest contribution to ending serfdom and feudalism.

Dyer concludes his book by noting that in the Middle Ages wealth did not mean happiness. A well off peasant with ample food and work, might be unhappy at their legal position, while a monk who had taken a vow of poverty and begged for his living might be very spiritually happy. Nonetheless the life of the majority of the population was not one of ease - but of restriction, exploitation and oppression - something that highlights once again that the Middle Ages were not a time of stagnation - but one of dynamic economic and political change.

Posted by Resolute Reader at 6:58 pm