Georges Simenon - Maigret at the Crossroads 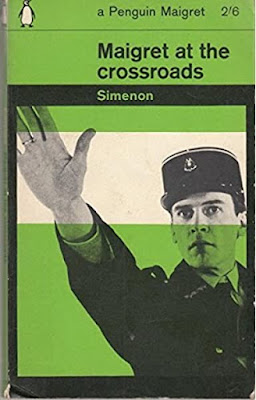 Somehow Maigret at the Crossroads is the only Maigret that I've read. Georges Simenon's French police detective featured in 75 novels and a couple of dozen more short stories. But even just reading this one novel you can see why the stories were so popular. Published in 1931 this is an insight into a very different France. In fact, the otherworldliness of the book is one of its charms and this is extenuated by the book's is rural setting. At the crossroads of the title is a petrol station and garage and nearby a large country house. The owner of this house, is under questioning at the start of the book as a Jewish diamond trader has been found dead in his house.

Pausing only to have his wife pack him a bag, Maigret travels to the scene of the crime. The Three Widows' Crossroad, as its is known, seems eerie and lonely. Through the night cars and lorries pass on the long road to Paris, and the house itself is strange. Carl Andersen and Else Andersen, the owners, behave strangely. Else keeping herself locked in the bedroom when her husband is away. But Maigret's keen eye quickly notices things aren't right.

Like many detective novels of its era the book is short, but Simenon packs a lot in. There's a surprising amount of gun action, and some interesting backstory for the Andersens. One thing that I didn't appreciate early on is that those found guilty of murder face the death penalty, and in France at the time that meant the guillotine. It makes a the ending denouncement particularly spine-chilling. Highly recommended.

Posted by Resolute Reader at 5:59 pm

Welcome to the world of Maigret - once you start, it's hard to stop!