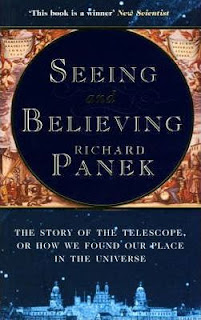 Panek begins with the world as it was when Galileo first turned a telescope to the skies. Galileo's generation had inherited an understanding of the universe that was essentially unchanged since the time of the ancient Greeks. In the generation before Galileo, the Polish mathematician and astronomer Copernicus had begun to batter down the walls that defended the universe of Aristotle. Galileo was able, with a magnified view of the universe to end that process. As Panek writes:

Through the telescope man [sic] had completed the intellectual journey he had begun two centuries earlier with the introduction of perspective into art. The telescope bridged Earth and key in a manner both literal and metaphorical. What had been terrestrial was now celestial; what was celestial, terrestrial. Earth moved through the heavens, one more wanderer, and the once perfect heavens suffered the same fate as Earth. The perspective cylinder united mathematics and philosophy, astronomy and physics, sense evidence and geometry, the ancient world and the modern, Creation and Creator. In two centuries man had gone from being the apple of God's eye to being God's eye.

A theme of Panek's book is that those who thought about the universe tended to think they'd reached the sum of all knowledge until a new discovery forced their perspective further. Copernicus and Galileo expanded humanity's vision into a solar system that ended at Saturn. Herschel, Kepler and others pushed the boundaries towards Neptune. Then the solar system lost its special importance and became one of many in an island universe. Then the 20th century found millions of other islands.

But Panek tends to decouple these insights from wider scientific changes. While he links the development of the telescope with the Age of Exploration and the development of states in the 17th century, he doesn't really get to grips with the way that the whole of existing science no longer fit with the needs of the new world order, of growing commerce and industry. Industry is, of course, the backdrop. There is a charming anecdote about William Herschel who turned the manufacturer of telescope mirrors from a hobby into a cottage business. They became so big that an army of workmen with numbers painted on their coats polished them while Herschel shouted instructions to them by name. It's an inadvertent insight into the arrival of a new economic era when workers became mere unnamed cogs in a machine.

There are also some omissions. Caroline Herschel, William's sister who became a leading scientist in her own right is only briefly discussed as a discoverer of comets. She's mostly someone who helps her brother by reading to him while he works. I don't think its necessarily accepted anymore that George Ellery Hale really thought he was visited by an elf during periods of mental illness and the author confuses the 250 foot Lovell Telescope at Jodrell bank for the earlier Transit Telescope that was built in 1940 and discovered radio waves from the Andromeda Galaxy.

Nonetheless this is a excellent short account of the way that the development of the telescope and associated technologies caused a transformation in our view of the universe. First published in the early 2000s it is in need of an update. Technological developments in the years since, with new space telescopes building on the discoveries of Hubble in all areas of the spectrum, and the increasing numbers of planets found around other stars, would further develop Panek's story. But if you want a good, readable account of the progress of Astronomy in the last 400 years, this is a worthwhile introduction.

Green - 15 Million Degrees: A Journey to the Centre of the Sun
Winterburn - The Quiet Revolution of Caroline Herschel: The Lost Heroine of Astronomy
Jardine - Ingenious Pursuits: Building the Scientific Revolution
Holmes - The Age of Wonder
Sobel - Galileo's Daughter

Posted by Resolute Reader at 7:25 pm