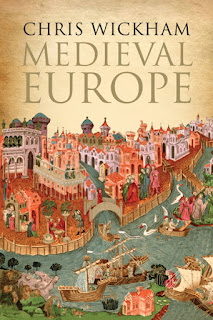 In hindsight Chris Wickham's Medieval Europe was probably not an ideal choice for holiday reading. Despite being relatively short at 250 odd pages (excluding notes) it is dense and cannot really be described as a popular history of the period. Despite this, I recommend it for anyone trying to understand the trajectory of the medieval period and what this meant for the population of Europe as well as the legacy for the modern world.

Wickham is concerned with the way the economic base of society creates a large political superstructure. His approach echoes Marx (who he quotes in the introductory chapter) but probably shouldn't be described as "Marxist", perhaps a more structuralist approach.


Medieval political communities based their coherence and their succeeds on the control of land... The reason is simple: all pre-industrial societies are based on agricultural wealth above all. There was nothing which one could call a factory in the middle ages, or for a long time afterwards... Most people, over four fifths of the population in the early middle ages,.. .were peasants: that is to say, they worked directly on the land as subsistence cultivators... Agricultural products were most of what was produced by human labour in the middle ages, and for that reason the control of these, ad by extension the land that produced them, was central.

While this is Wickham's starting point he understands that human societies are full of variety and complexity, so his book tends to explore each area of Europe at his different time periods and discuss the differences and similarities. The problem for the non-expert reader is that there is an enormous amount of detail. Despite importance Wickham gives to the economic base of society, he explores what this means in detailed studies of the top of society. Thus we get a vast amount of information about particular kingdoms, individuals, religious institutions, alliances and interactions between all these groups. At times its bewildering, and for this reader, I was left more with generalisations than with detailed recollections.

That criticism aside there are some great sections which readers will find useful. The story of the importance of Constantinople, and its eventual eclipse (remarkably late in European history) or the rise of Charlemagne's empire. Though I challenge anyone other than the expert to remember all the German princes, or the machinations of the Italian city states. Give the grand sweep of history and the size of the continent, some readers will know doubt be disappointed that their favourite bits only receive a short mention. Despite ten page references to the 1381 Peasants' Revolt in England, the substantive account only has a dozen lines or so.

But what matters to Wickham is the dynamism of the Medieval Period. His wealth of data allows him to explore the changes taking place:


This is the background for understanding Europe's political histories after 1350... Whether kings and other rulers still relied on the wealth coming from their own lands ('the domain', as historians of this period often call it), or could develop taxation on a scale large enough to pay for bigger or more permanent armies and denser infrastructures of government, thus has crucial implications for the comparative history of politics. Put simply, rulers who did not develop strong fiscal systems by now could do less, both inside their polities and outside them, than rulers who did, even though they often tried to behave in the same way.

This is essentially about the importance of the growth of what we might call the beginnings of the nation state, or at least the pretensions towards a strong state in some region. A dozen or so pages after the above  quote, Wickham notes that


What links almost all the rulers we have looked at.. is their preparedness, as soon as they had enough money to get an army together... to attack not only their neighbours but also on occasion realms quite some way away, for military glory and hoped-fro permanent territorial control. Hard gained resources were spent above all on displays of power, the rich courts and ambitious building which mark the post-1350 period, but an army was the biggest.. display of power of all, and using it to fight someone was the logical next step. The military machine underlying early modern political and fiscal development has its beginnings in this period.

After 1350 we see land still being the basis of wealth and power, but the raising of tax is now shaping "communities of taxpayers" which meant that "Rulers were thus stronger, but so were the communities of the ruled". Thus we see after this period a public arena that allows for both the development of new methods of production and for sharper conflicts between classes. Thus the "feudal revolution" that had transformed the earlier feudal world eventually gave rise to a much more confrontational public sphere, within which the class struggle could play out.

But this sphere was conditioned by the changing economic and political world. Developments of trade, technology, manufacturing and so on would eventually lead to a new way of organising society, but are rooted in the evolving medieval period. Wickham's book emphasises the dynamism of medieval society, and this is its primary focus. I should mention that Wickham doesn't ignore other aspects of these societies - the role of gender, developments in reading, writing, education etc. But the task he has here, and its an admirable one, is to understanding a broad historical sweep. For all the challenges his style gives the reader, there is much here of interest.