Dan Simmons - The Rise of Endymion 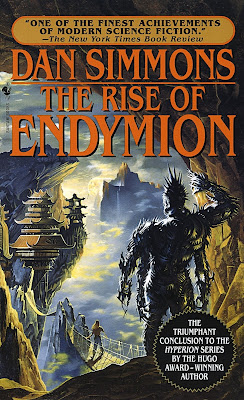 The fourth and final volume of Simmon's Hyperion Cantos brings together multiple narrative threads from the previous book and the two earlier ones. If volume three was mostly a chase, as Aenea and Raoul fled the galactic Catholic Church, this volume tells the story of Aenea's life as she spreads a message of religious radicalism. Travelling from planet to planet she begins to convert people to a new way of thinking that challenges the power of the Church and offers new ways of understanding the universe and humanities place within it. Raoul takes a different route and, through a time debt incurred by long distance space travel, meets up with Aenea when she has grown up. They become lovers.

Raoul struggles to understand his role, Aenea and her life. Jealous, confused and, on occasion stupid, he serves once again as a substitute for the reader. We learn about Aenea and her life as Raoul does, though on occasion I wanted to slap him and tell him to grow up! As Raoul searches his soul for his feelings for Aenea, galactic wide forces search for her and the Catholic Church launches a Crusade against the Ousters, whom they blame for humanity's condition. Behind the scenes (or perhaps under the fabric of the universe) other intelligent forces try to guide and shape events in their own interests. Rebellion explodes on planet after planet, in part inspired by Aenea's teachings but also because of the oppressive reality of Church rule.

Father de Soya breaks from the Church after having had to kill too many children in the name of the Church and begins to learn the reality of what the Church is doing and why. His alliance with Aenea moves them into final confrontation with the Church - and finally (finally!) Raoul begins to comprehend what is taking place - though it remains unclear why he is kept in the dark so much. The ending of the book, brings together strands from all four volumes in a brilliant way - forgotten events that weren't explained in the first couple of books suddenly take on importance, or at least are tied off and explained. But there are also some brilliant examples of Simmon's talent for description - the Dyson sphere of trees that suffers a massive attack from the Church's space-armada being one example.

The final volume is huge - over 800 pages - even for a series that has already had thousands of pages. But this isn't just because Simmons is tying up lose ends and bringing the story to a satisfying climax. Unfortunately it is also because he is prone to extra long descriptions and philosophical musings and gets a little carried away here - some of these feel much more clunky than the previous books and in my opinion weakened this book. Nonetheless its a satisfying finale that brings the whole sequence to a excellent close. And we finally understand what the Shrike is.

Posted by Resolute Reader at 8:06 pm