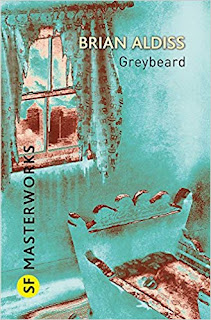 Brian Aldiss' 1964 book Greybeard sits alongside John Wyndam's The Day of the Triffids and The Kraken Wakes and John Christopher's The Death of Grass in what might be described as classic English novels about the end of the world portrayed through the collapse of the British state. As we face environmental Armageddon I'm finding such  doom-laden science fiction novels both attractive and terrifying, and Aldiss' book is no exception.

Set years after atomic weapon tests have sterilised all of humanity and most mammals, the book looks at how civilisation has fallen and how humanity has survived. The story follows the eponymous Greybeard as he, with his wife and other friends, travel down the River Thames with the aim of reaching the coast. Having left the relative safety of a small village where they'd lived for decades, we follow the group's adventures which allows Aldiss to tell us how the world is coping as the youngest generation reaches their 50s. In flashback we learn what happened in the aftermath of the last baby being born.

This is where it is interesting for contemporary readers. How will civilisation proceed if we see global environmental breakdown? We are unlikely to live through a gradual breakdown of society. Aldiss' describes how, as fewer and fewer children are alive, the world erupts into global conflict as states try and secure young people as future assets. Greybeard takes part in some of these wars, which are brutal - frequently killing the young who they are trying to capture. As economies collapse (people simply stop working as there is no future) states' breakdown and local dictators arise to control and protect local populations in a gross parody of feudalism. Readers familiar with Wyndam's work will recognise similar themes from the end of his Triffid novel. Eventually plague defeats these dictators and humanity survives in tiny villages, fearing outsiders and growing ever older.

Greybeard is a compelling read. I fear it has a lot to tell us about how climate chaos will likely lead to extremes of violence locally and internationally as states try to maintain their existence, though perhaps it under-estimates even that. The novel itself is well-written and compelling, even though I found the ending a little too positive and predictable.

I read Greybeard alongside the new book by Extinction Rebellion which I'll review shortly. The joint experience didn't leave me feeling particularly positive. But at least we have the chance of stopping environmental disaster through radical, mass political action. But the time is short, and in the real world it is the children who will suffer the most.

Wyndham - The Kraken Wakes
Christopher - The Death of Grass
Morrow - Is this the Way the World Ends?
Robinson - New York 2140
Posted by Resolute Reader at 7:25 pm

Email ThisBlogThis!Share to TwitterShare to FacebookShare to Pinterest
Labels: climate and environment, SF and F