Kassandra Montag - After the Flood 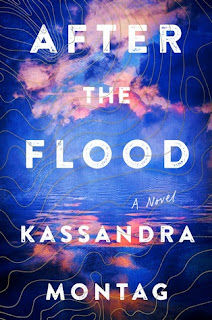 After the Flood is the latest bestseller inspired by the contemporary environmental crisis. The novel is set in the near future when a catastrophic flooding event caused by masses of water leaking out of the centre of the Earth has flooded almost all the land except for the tops of what used to be mountains. What's left of humanity has become entirely dependent on the sea, and farming of the small amounts of remaining land. Pockets of people have formed dozens of communities, increasingly dominated by "raiders" whose violent, pirate-like behaviour means they can steal what they want and menace for goods to sustain themselves.

The book focuses on Myra who survived the rapid flooding of the interior of the United States, but whose husband, when the water finally arrived, ran off with her daughter Row. Myra herself was pregnant with her second daughter Pearl. When we first meet these two they are surviving by fishing and then trading their catch for other necessities. The author, Kassandra Montag, sets up the context very well - we get a sense of small communities on the edge of existence, threatened by external violence, and eking out an existence on what is left from the collapse of civilisation.

Myra has given up hope of seeing Row again, but by chance learns of her survival, likely as a breeding material for one of the pirate gangs. Her journey to find her, which involves becoming part of a crew on a boat capable of the long distance voyage, make sup the rest of the book.

Since I'm partial to novels about the collapse of civilisation, I was looking forward to reading this, but I found myself frustrated. I thought the characters tended to be one-dimensional, and behave unrealistically. I liked Pearl particularly, though her strange habit of collecting snakes made no sense at all and I thought that her mother treated her appallingly. Pearl's fear that her mother was more concerned with her first daughter than her well-being certainly felt true, though Montag has Myra deny it through the novel. I didn't however feel convinced by any of the characters motivations and while the action sequences were fun, they seemed to only exist to hold together a rather less enjoyable story based on the characters' relationships.

But the biggest problem was that the premise of the book was utterly implausible and no-one seemed to question it. The cracking open of the Earth's crust and the release of vast quantities of water (utterly vast if we're talking about covering almost all the continental United States) defied plausibility, physics and belief. This undermined everything else about the novel. Sadly I was left disappointed by this latest attempt to help us think through the consequences of climate change.