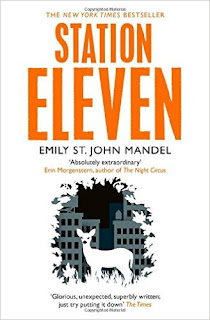 Station Eleven is one of the best post-apocalyptic novels I have ever read. Perhaps second only to George R. Stewart's ecological classic Earth Abides, in my personal list of favourites. Unusually the novel doesn't just tell the story of what happens to those who survive the end of civilisation, instead Mandel opts to tell the story in part through flashback. Contrasting the lives of those who survive with events from before the tragedy.

Central to the story are actors, plays and the theatre. In the modern world, the story and the characters themselves revolve around Arthur Leander. His wives, friends, and the medics who try to save him form characters in the aftermath of a rapidly spreading flu that decimates the population.

As always in this novel what is fascinating is what happens after the fall of civilisation. One of the central characters in the post-apocalyptic world, Kirsten, a child actor on stage with Arthur Leander at the point when the flu arrives in Toronto, cannot remember the "first year". She's considered lucky. But like many other survivors she remains obsessed with the old world, collecting pictures and stories about Leander from old gossip magazines. With nothing left of the old world, all she can hold on to is the the famous old actor, and the enigmatic graphic novels he gave her - the Station Eleven of the title.

This obsession with the past is true of others too, there's a brief encounter with a scientist trying to find "the internet". Having rigged up a bicycle generator, he peddles furiously and the youngsters are amazed to see a laptop screen light up. Alas, Page Not Found. There are moments too when Mandel's writing gives us real insights into her characters, like the argument about the rudimentary lessons given to children in the new order. At what point should the adults simply stop teaching them about how things were? What's the use of telling them about aeroplanes and mobile phones when they cannot comprehend them?

Beautifully written, with detailed well rounded characters and a plot that never falls into cliche. This is a novel that should become a classic and I highly recommend it.
Posted by Resolute Reader at 6:45 pm

Martin, I agree with your superlatives about this book. I don't read a lot of science fiction, and I don't often award a book five stars (I keep track of books in my goodreads account), but this one definitely got five stars!

Your review is excellent.

However, I note that you twice refer to the book as describing "the end of civilization." One of the themes that I thought the book was addressing, from several directions, is: just what is civilization? Is it modern technology (cellphones, electricity, the internet) and if those are gone, is civilization gone? What about the fact that Shakespeare wrote at a time when none of those existed, and plagues were rampant threats?

I'm 7 books through a random collection of 10 End of the World novels. This isn't among them unfortunately. I've heard several people speak highly of it. I'll keep an eye out for it and snap it up at some point.