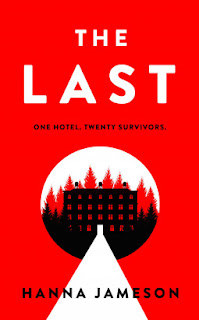 It has been three years since Donald Trump's election which means that those authors who were inspired to write post-apocalyptic fiction in the wake of his inauguration are now having it published. Hanna Jameson's The Last is very clearly modelled on events after Trump, or a similar US President (who remains nameless in the novel) causes a nuclear war to break out. The question of the Presidency, and who voted for "him" is a running plot-line through the book which centres on a small group of residents trapped in a hotel in the Swiss mountains in the aftermath of the war.

Jon Keller is the focus of the book. He's torn by angst having failed to reply to a last text message from his wife, and attempts to deal with the trauma by investigating an apparent murder that took place just before the end of civilisation. What makes the book great is the exploration of how individuals cope with what has taken place - one character, a doctor, points out that everyone is in mourning - not just for their loved ones, but also for the lives they have lost. So while disaster aficionados will enjoy the parts of the book that deal with survival in the aftermath of the collapse of civilisation, there's much more than just the usual hunting for food and fuel. On occasion Jameson links the too together rather well, as when she depicts characters, particularly Jon, trying to use their phones to call home or conserving batteries to listen to MP3's one last time.

Unfortunately I felt the book was weakened by am unbelievable ending, but the various threads (and the murder mystery) are tied up rather well despite this disappointment. Highly recommended for those people who are thinking through the end of the world.