Rivers Solomon - An Unkindness of Ghosts 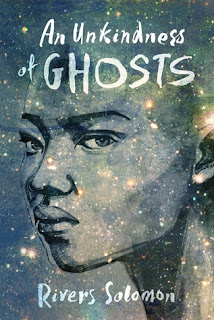 It is rare to find a genuinely original science fiction novel, but Rivers Solomon's An Unkindness of Ghosts deserves that label. It is set on a generation starship, the Matilda, though the reader is never clear entirely why the ship left its home planet and where it is going. It is entirely possible that none of those on-board know either. The ship's destination is a "promised land" and this is the first clue to the nature of the society on the Matilda.

Whether it began like this or it somehow evolved/degenerated, the people on Matilda live in a society rigidly split by race and class. Those on the lower decks, like the central character in the book Aster, do the majority of the work and are all dark-skinned. The majority of those at the top of the ship's pecking order are white and live lives of extreme luxury. Aster has medical skills and she uses these to help those one her deck and on others. This doesn't mean that she can escape the mind-numbing work producing food for the thousands of people on-board Matilda though, and it is through Aster's eyes that we see how society maintains itself.

Despite the enclosed spaceship, this is not a vessel of shortages. The ruling elite live lives of luxury, with plenty of food, drink and, notably, space. The slaves at the bottom are crowded into communal living, working hard in fields and short of medicines, food and comforts. Despite the overwhelming numbers of slave workers the system is maintained through brutal violence and terror. Physical beatings are common, for the smallest of transgressions, rape and other abuse is common and, because this is a space ship, those at the top of the order even reduce the temperature of the lower decks to ensure cooperation. This results in tragedy. One of the poignant early scenes is when Aster has to remove a young person's foot as a result of frostbite.

Solomon uses the spaceship scenario brilliantly to make sure this isn't simply the antebellum South transposed into space. As Aster moves around the ship we find out that different levels have different languages, histories and beliefs. The author plays around with the use of gendered language and we see how the oppressed develop ways of communicating to get around their "masters".

Gradually Aster learns that her mother left her a secret before her death, one that might open up Matilda's mysteries, but one that puts Aster's in immense danger. That story is well told, but I'll admit that what I mostly enjoyed was the world that the author builds up. Slaves working in a generation spaceship growing food for their masters shouldn't work, but Solomon makes it real.

Like slavery the novel isn't pleasant. Solomon rightly doesn't duck the reality of violence - Aster makes her own medical paste to put on herself to numb the pain of being raped. An event that is common enough that they need to prepare for it. Some of the scenes of violence are painful, but they also serve to contextualise the latter rebellion against the system - one of the more satisfying scenes that I've read in science fiction for a long time.

Reading An Unkindness of Ghosts I was reminded of the story of the Haitian Revolution that was brilliantly retold in a book I reviewed recently. That's not to say that Rivers Solomon has written a work of history (though their own history weighs heavily on the characters in the novel). If anything this is a book about Earth today - with #BlackLivesMatter movements and other anti-racist campaigns fighting bigotry and racism today. With its discussions of class, race and gender it is a book that uses real history and a fictional future to illuminate the world today. I highly recommend it.