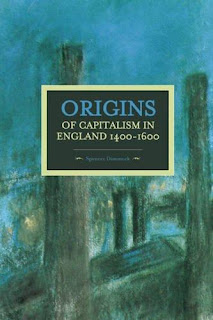 Spencer Dimmock's book challenges many of the cherished ideas of Marxists who hold this point of view, and this ought to have been an important contribution to the debate. Unfortunately it is marred by its ill-tempered polemic, it's dismissive approach to many of those the author disagrees with, and its hagiographic defense of the Marxist who is most central to Dimmock's own ideas, Robert Brenner.

This is a shame as there is much of interest in The Origin of Capitalism in England particularly the detailed use of sources in the second part to emphasise crucial parts of Dimmock's arguments. There are also important critiques of non-Marxists and what might loosely be termed, critics of Brenner from the right, which may well be of use to those trying to get to grips with non-Marxist history writing. Yet time and again I found myself putting down the book out of frustration at the author's style.

Dimmock, as does other political Marxists like Brenner, directly challenge some of the central arguments of those they call the orthodox Marxists. Here, for instance, is Dimmock's assertion that


There was no growth of a bourgeois class in direct opposition to old feudal lordship drive by commercial expansion and growth of the productive forces which then defeated the latter in the 'bourgeois revolution' of the mid and late seventeenth century, as has often been contended. Instead feudal lord-ship became 'bourgeois' itself... English lords were as responsible for breaking the remaining extra-economic prerogatives of monarchy and its allies as the 'bourgeoisie' that grew up in the shell of the estate system.

Leaving aside that Dimmock asserts there was "no growth of a bourgeois class" and then refers to the bourgeois "allies" who clearly had grown from something, this passage strikes me as an example of an error of approach by the author. Keen to dismiss orthodox Marxism for a teleological approach, I think he misunderstands the nature of that approach itself. To take one example, Marx never really suggested that there was an automatic process of transition from feudalism to capitalism. I was struck for instance, that in his polemic against writers such as Chris Harman, Dimmock failed to note that Harman highlights in several of his pieces the way that capitalism failed to develop out of "feudal" societies. It's far from a teleological method. Take Harman's rather more nuanced approach in his piece The Rise of Capitalism which unfortunately if not discussed by Dimmock.

On occasion Dimmock also deploys some straw men. He argues for instance "When historians speak of capitalism being driven from below, they must recognise that the majority of the commons in both towns and countryside were opposed to capitalism." He is clearly right here. It's an argument that is echoed by Michael Andrew Žmolek in his recent book Rethinking the Industrial Revolution. But the danger here is that Dimmock is implying that everyone (other than himself, Brenner and a few other political Marxists) argues this. In fact most Marxists wouldn't suggest that this is how the transition to capitalism came about. The idea of developing productive forces causing the further development of people within feudalism with an interest in overthrowing feudalism and creating a society more open to their own interests does not imply that there (I caricature) groups of people who sat down and planned the transition with a blue print of the sort of society that they wanted. Indeed most of those who ended up leading (say) the English Revolution certainly did not begin by wanting to chop off the King's head. They were lead to that position by the nature of the War itself and the extent to which the old order was vigorously defended.

At root I think there are two problems with Dimmock's book. One is a misunderstanding of Historical Materialism itself which he seems to see rather mechanically. For instance, here is Dimmock's summary of HM:


in all class societies the direct producers will, where possible, always aim to increase their wealth by seeking gains from trade through changes in productive organisation, in other words by specialisng production in response to price changes for particular commodities.

This is not at all the version of historical materialism I get from reading Chris Harman or even The German Ideology. In fact, it implies a type of inherent greed to human nature which seems distant from what Marx actually described.

Secondly, and perhaps more fascinatingly, Dimmock appears to have in his sights the project for the revolutionary transformation of society. One of his core arguments is that orthodox Marxists have a particular understanding of the transition to capitalism because they want to replicate this in the transition to socialism. Here is not the space to tackle what I see as Dimmock's  mistaken understanding of how that process would take place, but it is worth noting his own vision of that change.


if due to a chronic crisis of capitalism, wage workers no longer had the option of seeking capitalist employment, concessions born out of necessity in industrial and agrarian production may be drawn from big business and the sate in the form of co-operative, non-market ventures, following perhaps the election of a party given a mandate for necessary radical change.

This vision of radical change coming through the voluntary giving of concessions by corporations in midst of economic crisis is in direct opposition to Marx's own ideas which saw the state as being a tool of the ruling classes to maintain their power. Such concessions would surly have already been made if capitalism had such a benevolent core. As we know from history, the system is quite happy to have reserve armies of hungry and unemployed, being motivated by their profits. Dimmock has this utopian vision of change because he rejects what he believes are the necessarily violent tendencies of orthodox Marxists, whom he accuses, most unfairly, of believing the violence and suffering of the transition to capitalism was necessary for the eventual installation of socialism. This view may have been true of those who followed Stalinist distortions of Marxists, but is manifestly not true of those whom Dimmock is polemicising against here.

These inherent weaknesses in Dimmock's book prevent me encouraging potential readers to buy it. There is much to be learnt from the debate between Robert Brenner and his critics, but I don't think that this is the book that will illuminate the differences.