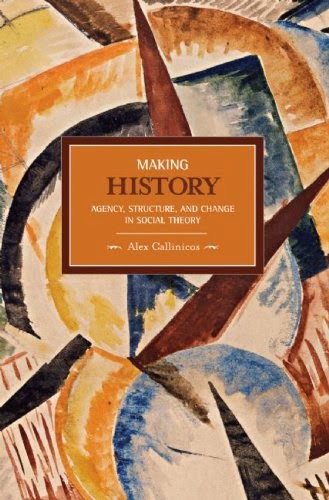 At the outset, I should say that this is a challenging book. It deals with debates and polemics within the academic world of social theory that most casual readers will not be aware of. As such, even for those of us who have read a good deal of Marxist theory, it can be in places inaccessible.

That said, for those who persevere there is a great deal within this book that repays those who do read it. In particular, the trenchant and clear defence of Marxist approaches to history, historical change and the role of workers in making revolution are very important.

Callinicos begins with an overview of various social theorists, and their roots in wider philosophical writings. While some of these thinkers may be unknown to the reader, others, like Foucault are oft-quoted and rarely understood. Callinicos does an excellent job in drawing out their ideas and examining them through the Marxist lens. One of the core parts to this section, is the debate on "human nature". Callinicos puts it thus:

"Central to Marx's account of human labour is its redirective character, namely the fact that human beings' ability to consciously to reflect on their activity allows them to modify and improve on prevailing productive techniques. Rather than being tied to the fixed repertoire of behaviour characteristic of other species, human productive activity is distinguished by its flexibility, by the indefinite variety of ways in which human beings may meet their needs by virtue of their cognitive capacities."

Here we have a got example of Callinicos' approach in the book. Rather than looking for fixed points of human behaviour, he sees a dynamically changing world where humans interact with each other, and with nature to create the world they inhabit. The historically changing social world is itself a reflection of wider forces:

"To specify the character of a mode of production is to give an account of the specific combination of the forces and relations of production it involves."

This simple enough sounding statement has produced an enormous amount of literature and debate. Callinicos examines the varying understandings of these in detail, challenging both the work of academics like G.A Cohen, but also the writings of revolutionary socialists like Chris Harman. Students of historical materialism, as a concept, will find these sections invaluable.

The process of change between "modes of production" is a second theme for Callinicos. He points out that "instead of exploring the differentia specifica of particular modes of production, analytical Marxists tend to focus on what they see as Marx's views of the universal mechanisms of historical change." However, such universals do not necessarily exist. For instance, the roles of (say) the bourgeoisie during bourgeois revolutions is very different from that of workers in proletarian revolutions. Callinicos points out that that the former are not self-conscious actors, but come to the forefront through a process of "molecular" change and frequently a "compromise" with the old order.

The final section of the book deals with the role of "agents" in historical change. It thus looks at debates that consider whether individuals have a collective interest in change, through, the "prisoner's dilemma" and whether social revolution is "rational" from the point of view of individual workers. It is in this section that Callinicos' is very clear. This is not least, because the author is linked to a network of organised socialists trying to create change. Refreshingly, the book's defence of the need for working class revolution, breaks with the academic debates that Callinicos has ably intervened in. Philosopher's have merely tried to understand the world, the point is, of course, to change it.