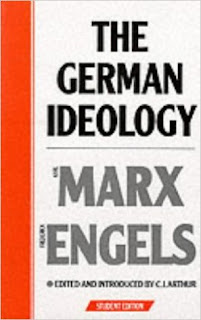 Reading The German Ideology I am once again reminded about how clear the writing of Marx and Engels can be. That said, it's always useful to have a good guide, and this student edition from Lawrence and Wishart, has an excellent introduction by C.J.Arthur which puts The German Ideology into the context of the developing ideas of Marx and Engels, as well as the debates taking place at the time.

The German Ideology was written as a polemic, and explores Marx and Engels vigorous debates with various other philospohers. This is why the introduction is important, because most of these philosophers have been forgotten to history, except as the recipient of the authors' critique and wit. To cut down the amount of this, C.J.Arthur has edited the work to bring out the key selections from this important work, and these are fantastic to read.

The German Ideology is where Marx and Engels first set down the ideas that will eventually become the body of thought known as Historical Materialism. Arthur describes it as the "first recognizably 'Marxist' work". He quotes Engels saying with hindsight that it "consists of an exposition of the materialist conception of history which proves only how incomplete our knowledge of economic history still was at the time".

The authors begin by challenging the "Young Hegelian" view of the world, an idealistic one where "the relationships of men, all their doings, their chains and their limitations are products of their consciousness". Famously, Marx and Engels challenge this, with their materialism.


Men can be distinguished from animals by consciousness, by religion or anything else you like. They themselves begin to distinguish themselves from aniumals as soon as they begin to produce their means of subsistence, a step which is conditioned by their physical organisation. By producing their means of subsistence, men are indirectly producing their actual material life.

This core idea runs through the whole work, that humans are shaped by the society that they build. Marx and Engels explore how this develops with a brief, and somewhat simplistic survey of history, inverting the Hegelians,


The production of ideas, of conceptions, of consciousness, is at first directly interwoven with the material activity and the material intercourse of men, the language of real life. Conceiving, thinking, the mental intercourse of men, appear at this stage as the direct efflux of their material behaviour.... Men are the producers of their conceptions, ideas, etc - real, active men, as they are conditions by a definite development of their productive forces and of the intercourse corresponding to these, up to its furthest forms.

And to reiterate their criticisms, Marx and Engels continue,


In direct contrast to German philosophy which descends from heaven to eartth, here we ascend from earth to heaven.

In other words, human ideas evolve out of the real world, they aren't created randomly, or arise out of some general truth. In my own work on ecology and human history, I've often noted how the approaches to nature and the surrounding world are radically different depending on the way in which socieities are organised. Capitalism has a particular relationship to nature, because for capitalist production, nature is seen as a resource; part of the productive process geared towards accumulation. This contrasts with nature as conceived of by hunter-gatherer communities for instance. Nature is also central to the historical materialist account in The German Ideology. Marx and Engels put it at the heart of their analysis of human history, in contrast to the philosophers they critique who see it as eternal, unchanging and passive.

Marx and Engels are full of damnation for the limits of German Philosophy. They write at one point, that "across the Rhine...history has stopped happening".

While the authors would go on to clarify and develop their ideas, the book has some excellent expositions of their ideas. Here for instance, is the culmination of a summary of their understanding of the process of historical change, which might be seen also as the basis for later Marxists' theories of Permanent Revolution.


Thus all collisions in history have their origin, according to our view, in the contradiction between the productive forces and the form of intercourse. Incidentally, to lead to collisions in a country, this contradiction need not necessarily have reached its extreme limit in this particular country. The competition with industrially more advanced countries, brought about by the expansion of international intercourse, is sufficient to produce a similar contradiction in countries with a backward industry (e.g. the latent proletariat in Germany brought into view by view by the competition of English industry). [Form of Intercourse would eventually be clarified to Social Relations]

For the general reader trying to get a handle on the essential ideas of Marx and Engels this might not be the best starting point. But for the reader with a good grounding in Marx's ideas and a decent edition (this one also has some useful and relevant supplementary material) this is a rewarding work.