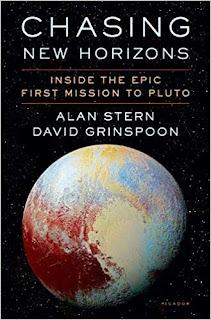 The arrival of the New Horizon space probe at Pluto in July 2015 was the scientific highlight of the decade. It made headlines across the world, and through social media was followed avidly by millions of people. Despite expectations that Pluto and its moon Charon would be rocky, crater ridden bodies it turned out that they both had a wealth of surface features, with stunning geological formations, huge ice mountains, and shiny plains. The images became some of the most shared pictures on the internet - one of them is the backdrop to the PC that I'm writing this review on now - and continue to inspire and enthuse.

But the New Horizon's mission almost didn't happen. In fact, as this fascinating study shows, it had an extremely long gestation period. The trip to Pluto took just over nine years - but the roots of the mission began much earlier in the 1980s in the aftermath of the Voyager probes to the outer-solar system. The Voyager missions that both visited Jupiter and Saturn with one craft going on to Uranus and Neptune through the 1980s. In their own time they were as inspiring to scientists and the public as New Horizons was to be. But Pluto, at that time still designated as a planet, was not on either of the Voyager's itineraries. For some young aerospace engineers and scientists, this was a challenge and they set about convincing NASA that a visit to Pluto was worth the money, time and resources.
With hindsight it is easy to say that New Horizons was well worth the cost. But that was certainly not the case. Alan Stern, one of the authors of this book drove the project forward and it details the ups and downs of the project. Despite proving time and again that a trip to Pluto was worth it in terms of science and value for money, politicians and NASA bureaucracy repeatedly conspired to try and cancel it. Any public sector project suffers from lack of resources and the whims of politicians who can end programmes with a pen stroke, but spaceflight is on a much larger scale.

As the 1980s became the 1990s and then the 2000s, successive US governments and NASA administrators blew hot and cold on the Pluto project and so when the programme finally got the it was a race against time to ensure that the engineering and technology could be in place for a very tight launch schedule. Due to their different orbits Pluto is currently moving away from Earth and any delay made the complex manoeuvres through the solar system harder. In addition Pluto was moving away from the sun and if scientists wanted to study it's atmosphere they'd have to get a probe there earlier rather than later.

I was also struck by the limitations imposed on the selection process through the way that NASA outsources projects to private companies, and secondary institutions, all of whom are in competition for contracts. A good chunk of the story tells how Stern put together a team at the Applied Physics Laboratory (APL) to make a Pluto proposal against their competitors at the Jet Propulsion Laboratory. The story of the competitive edge highlights different technological solutions to the problem of getting a package of scientific instruments to Pluto, but in my view also the limitations of this sort of selection process.

Three different manufacturers made the rocket stages and spacecraft propulsion systems and while some 2,500 women and men worked on the New Horizons mission, many were from different companies and institutions:


This workforce stretched far beyond SwRI [Southwest Research Institute] and APL, with more than a hundred participating companies and universities, plus NASA, and other government agencies in the mix. Major subcontracts under APL, SwRI or NASA included Ball Aerospace, which built the "Ralph" camera spectrometer instrument; JPL which provided the Deep Space Network... Lockheed Martin, Boeing... Aerojet... [etc]

Each of these added extra costs, bureaucracy and personal to the project. This is the limitations of doing huge science projects based on a system dominated by private multinationals.

Given the enormous amount of time (nearly 15 years) that it took to get a Pluto mission into space before the decade long flight, it is no surprise that the crew were enormously emotional at their success. The final sections of this book that deal with the preparations and arrival at Pluto read like an adventure story, particularly when the team have to solve a major critical problem a few days before arrival. The authors give a real sense of the enormous challenges posed by such a project and the marvellous skills of the women and men who made it a success. I was particularly fascinated by the descriptions of how the spacecraft was able to do its observations while travelling at near 30,000 miles and hour through the Pluto system.

Despite the seemingly niche subject matter this is a book that tells an amazing story. It's well written, at places exciting, and always fascinating even when discussing NASA's bureaucracy. As I write this, New Horizons is a couple of weeks away from its next mission target and reading this has given me new insights into what that involves. I'd recommend it to anyone wanting an insight into the work that takes place behind the science missions, but one thing saddened me too. New Horizons demonstrated exactly what humanity can achieve given the resources, but this book showed how all too often achievements like this never get off the drawing board. New Horizons cost approximately $720 million over ten years of flight. The Iraq war cost the US over $1 trillion. One day humanity will decide what its real priorities are.

Brzezinski - Red Moon Rising: Sputnik and the Rivalries that Ignited the Space Race
Scott & Leonov - Two Sides of the Moon
Winterburn - The Quiet Revolution of Caroline Herschel: The Lost Heroine of Astronomy
Sobel - Galileo's Daughter
Gleick - Isaac Newton
Clegg - Gravity: Why What Goes Up, Must Come Down
Holmes - The Age of Wonder
Posted by Resolute Reader at 9:34 pm