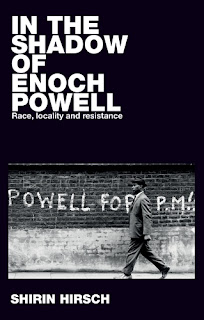 The 50th anniversary of 1968 has led me to read a number of books marking that year's great struggles. But not everything that took place was progressive. In the UK an infamous speech by a leading Tory MP, Enoch Powell quickly became known by its most famous idiom, "Rivers of Blood" after Powell's prediction that Britain would be engulfed in racial conflict caused by immigration.

Powell's speech has long since become a rallying cry of the far right in Britain. Just a few weeks before I read Shirin Hirsch's new book a fascists poured red dye into a fountain in Bristol and played Powell's words over a speaker system. That they were immediately countered by a strong anti-racist response is, in part, a result of events that began in 1968.

Since his death in 1998 many people have tried to rehabilitate Enoch Powell. They note his military career, his devotion to the British Empire and his supposedly principled positions on many issues. Mainstream obituary writers tended to gloss over his racism, suggesting that it was a one-off, or some eccentric view that rarely got heard. But Powell was a racist, and his racism was rooted in his belief in the supremacy of the British nation and the progressive nature of its Empire. Hirsch shows Powell's rhetoric was not simply the speech of a isolated racist, rather they reflected wider social circumstances.

For Powell the Empire was a source of wealth for the Britain, and its people were merely resources. As Minister of Health he recruited oversees workers to work in the NHS, yet in the early 1960s as the post-war boom turned to decline, Powell turned on those he had championed. He looked at America and was terrified by the Civil Rights movement.

Powell was also ambitious. In 1965 he'd stood for the Tory leadership and been defeated so, as Hirsch explains,

Powell's shift towards a new anti-immigrant politics was made within this context of individual ambition as well as national crisis. In the late 1960s British capitalism was forced to cut real living standards, being to increase unemployment and raise rents and prices. David Widgery recalled how a real fear had begun to spread within ruling class circles that the rule of law was no longer guaranteed.... Powell's speech was born out of this class conflict.

Yet one of the contradictions of this was that Powell, the arch capitalist, found his words had a real resonance with large sections, of the working class. Hirsch says:

For Powell's new racism to resonate with working class lives, his words had also to speak to the fears and disillusionment with established politics which had emerged in 1968, connecting with new material anxieties within sections of the working class who had lost faith in the succession of leaders who betrayed their trust.


The impact of Powell's speech was immediate. He'd released the text early to ensure that there was maximum coverage and quickly it made headlines across the country. Powell was sacked, probably to his great pleasure, and sections of workers took action (most notably a big strike by dockers in the East of London). In Wolverhampton where Powell was MP quotes from local black residents speak of their fear in the aftermath as racists grew in confidence.

Hirsch's book is a close study of Wolverhampton at the time of Powell's speech. He was a master of rhetoric and his speech portrayed a white British culture being destroyed by immigrant outsiders. Hirsch notes that immigrant in this context was code for black, as Powell was not concerned with the Polish or Italian immigrants to the city. Hirsch also points out that in the aftermath of Powell's speech, as racism rose, the black community of Wolverhampton was ignored by the media who descended on the city, and one of the great things about her book is that she gives a voice to some of them. 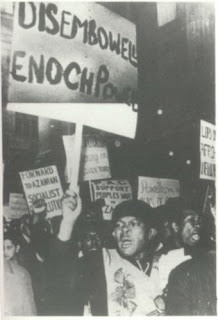 Most of the response locally was pro-Powell. Despite some critical statements from local figures and trade unionists, there was nothing that could "provide a direction for how to challenge the racism taking hold... however, new forms of resistance were taking place in Wolverhampton, actions and ways of living that challenged Powell's words not yet in a direct form, but instead taking place on an everyday level."

In the context of the wider radicalisation of 1968, left-wingers, anti-racists and campaigners challenged Powell's racism. But Hirsch argues that Wolverhampton's black population was central too the growth of the movement against Powell and racism in general. She shows how the city's history of struggle which had seen black and Asian people engaged in important fights over their own rights, helped shape a response. The wider context mattered too. It was also notable that black people took inspiration from international struggles (particularly the Civil Rights movement in the US) and mobilised themselves. Hirsch writes:

Blackness then became a way of resisting Powell's racial impositions, drawing guidance and inspiration from the politics of Black Power in the United States... The [newly formed] Black People's Alliance went on to organise a [London] demonstration of 4,000 people a few months later... An effigy of Enoch Powell taken from a coffin was set alight with chants of 'Disembowel Enoch Powell'.


Hirsch describes how Wolverhampton's black and Asian communities were placing themselves at the heart of new movements that both challenged racism but also fought for the right to be a conscious part of the working class. These movements took time to make themselves heard. The 1970s were simultaneously a period of growth for the far-right and fascists, but also eventually became a period of a mass anti-racist movement that involved Black and White people fighting together to turn the tide of racism.

Today we desperately need a mass anti-racist movement. I was struck while reading Hirsch's book at the close similarities between Powell and some far-right figures today. Powell was very much a creature of the capitalist class, but he also was skilled at "carefully positioning himself as at odds with government policy, standing up for the little, local man against the pro-migration liberal establishment reigning in London." Readers can make their own parallels with contemporary racists.

The racist forces that were encouraged and called into being by Powell's racist speech were eventually turned back. But the anti-racist movements did not appear automatically, rather they had to be consciously built and Shirin Hirsch's book is a fantastic study of what took place in Wolverhampton which was at the epicentre of the racist storm. As such her book isn't simply of academic interest - it is a tool to help understand how we can turn the tide again today. I highly recommend it.

Richardson (ed) - Say it Loud! Marxism and the Fight Against Racism
Fryer - Staying Power: The History of Black People in Britain
Dresser - Black and White on the Buses: The 1963 Colour Bar Dispute in Bristol
Aspden - The Hounding of David Oluwale
Henderson - Life on the Track
Posted by Resolute Reader at 6:32 pm