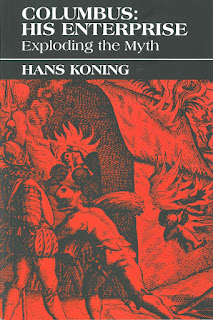 Every American child in second or third grade learns about the brave sailor, son of a Genoese weaver, who convinced the King and Queen of Spain to let him sail west. Fighting the elements and a crew who thought the earth was flat, he persisted, and with his three little ships discovered America.

Thus Hans Koning neatly summarises the Columbus myth in his opening paragraph. It's a summary that fits pretty much with what I, on the other side of the Atlantic, learnt about the explorer in my own school days. Koning then spends the rest of this short book explaining why this summary is deliberately wrong. He draws on Columbus' own writings, other contemporaries and those of various historians to show that Columbus' "Enterprise" was far from a benevolent voyage of discovery - instead it was a violent quest for plunder.

Koning begins, not with Columbus, but with the geo-political context of the competing Europe states of the 15th century. Portugal, a poor nation in the far west, was desperate to find wealth to allow it to compete on an equal footing with its neighbour Castile (modern Spain). Wealth was known to exist in vast quantities in the far-East - India and China in particular. It made its way to Europe via the Italian middle-men from the Middle East. The King of Portugal was beginning to send out exploratory quests down the coast of Africa to find a sea route to India. Columbus' big idea was to head West and when the Portuguese monarch failed to support him, he asked the Spaniards.

Promising them extreme wealth he eventually kitted out the tiny fleet that made it to the Caribbean. There they were universally welcomed by the indigenous people who showered them with gifts and friendship. But Columbus saw them very differently:


All the men looked young... They were well built, with good boides and hansome features. Their hair is coarse, like horse's hair, and short... They have the same color as the Canary Islanders, as they are at the same latitude. They do not bear arms, and do not known them , for I showed them a sword, they took it by the edge and cut themselves out of ignorance. They have no iron. Their spears are made of cane... They would make fine servants... I believe they could easily be made Christians.

But as Koning explains, they were destined to "not even live as slaves; they were to die". In their desire for gold the indigenous people that Columbus were to find were forced to provide vast quantities of gold, despite the land barely containing any. Those who dissented were killed, and those who failed to deliver lost their limbs as a warning to others. Mass rebellion failed and so mass suicide followed. In Hispaniola, Koning writes:


In 1515 there were not more than ten thousand Indians left alive; twenty-five years later, the entire nation had vanished from the earth. Not one Indian on the island had ever been converted to what Columbus called 'our Holy Faith.'

In all of this, Columbus is far from the pious leader he is supposed to have been. He is happy to use violence to achieve his aim; he sees the native population of the lands he finds as little more than slaves who will find him the supposed wealth of the Indies. He does not object to the rape of the women by his sailors - in fact he tries to aid this by taking on board female slaves for his men to use on their voyage. Nor is he particularly nice to his own men - he cheats the first man to spy land out of a massive reward by pulling rank, and he lies to them about their location so they don't turn against the trip. Despite this, he ends up amply rewarded by the Spanish, though few of his predictions have come true. The wealth of the Americas does begin to pour into Spain - in terms of gold, slaves and natural resources - but it comes from other voyagers and admirals.

Today many countries celebrate Columbus Day on the anniversary of his arrival in America. Hans Koning's short, but excellent book, is an excellent explanation of why this day is actually a celebration of genocide, rape and the violent appropriation of natural resources. The myth of Columbus exists to justify the colonial conquest and ongoing imperialism. The legacy of this, the underdevelopment of countries, poverty and lack of resources, is still felt today.

Fernández-Armesto - 1492: The Year Our World Began
Mann - 1493: How Europe's Discovery of the Americas Revolutionized Trade, Ecology and Life on Earth
Cronon - Changes in the Land
Galeano - Children of the Days: A Calendar of Human History
Galeano - Open Veins of Latin America
Posted by Resolute Reader at 3:31 pm