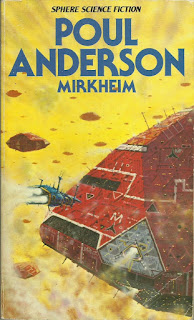 Poul Anderson was a prolific US science fiction author whose career spanned the post-war period. He published dozens of books, stories and articles and had an interesting personal background - born of Scandenavian parents and growing up in the USA, he moved to Denmark with his mother after his father died then returned to a farm in the American mid-west at the outbreak of war. Like his contemporary Robert Heinlein, Anderson's politics were right-wing libertarian and they certainly shine forth in Mirkheim.

On one level this is a story with quite a lot of potential. It contains a number of characters that Anderson repeatedly used in some of his novels, but is not part of any extended story arc. It deals with the imperial machinations of various galactic powers as a planet, Mikheim, is discovered. Mirkheim, for reasons that are rather ponderously explained in the introduction, is a source of very rare metals which are not easily obtainable despite the huge size of the galaxy. The planet quickly becomes the centre of a confrontation between various galactic trading blocs that are centred on particular planetary (human and alien) systems.

This confrontation threatens all out war and the central characters of the novel are in a race against time to stop the non-human threats and ensure that free trade is allowed across the galaxy. War is bad for trade, and intergalactic capitalism cannot allow it to happen so the agents of the Polesotechnic League (yes really) are sent out to sort out the problem. Anderson is quite happy to use the novel's conclusion to set out his own views on government and state. Nicholas van Rijn, one of the key characters in the book, who appears to be some sort of trader, freebooter and head of a galaxy spanning financial, trading empire sets out the problem:


The League was once a free association of entrepreneurs what offered goods and services but did not force them on nobody. It is not private outfits what fights wars and operates concentration camps, it is governments, because governments i those organisations what claims the right to kill whoever will not do what they say.


The idea that companies do not force products on others will be news to many, as will the idea that governments aren't acting in the interest of corporations at home. But such are the limitations of libertarianism. Does this matter? Well it shouldn't. Decently written political novels can be enjoyed by those who don't agree with them politically. The problem with Mirkheim is that the whole story appears to be a setup to enable Anderson to get on his soapbox. A problem that is also closely associated with Robert Heinlein. In addition, while van Rijn's accent and awkward sentence construction is a reflection of his Dutch origins - the rest of the book is full of convoluted writing, over-written descriptions and strange language. The introduction is also painfully long and boring. I won't be reading it again, and I'll probably give the rest of Anderson's books a miss on the strength of this.