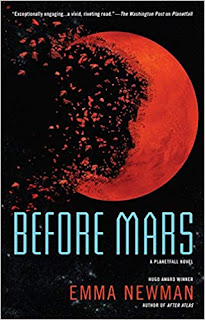 This cracking novel begins with the arrival of Anna Kurbin on Mars. While she is a qualified geologist arriving at humanity's only base on the Red Planet, it quickly becomes clear that she is really there to paint her unique canvases so that the ultra rich owner of GavCorp, the multinational (multi-planet?) organisation that runs the base, can get even richer.

Initially Kurbin thinks she might be going mad, an after effect of the long journey, when she discovers a note that she appears to have left herself in her new quarters. This note warns her about the base psychiatrist. How did it get there? Quickly Kurbin begins to find other discrepancies in the behaviour of the personnel on the base - a human footprint in a unexplored part of Mars? That's much stranger than meeting Man Friday.

This is a very tightly written thriller that hooked me from the start. While dealing with greedy multinational corporations, the lies that their avatars tell, and Kurbin's search for truth, it also has a nice interplay of geopolitics, the personal crises that will take place as people leave the planet and musings on motherhood, gender and relationships among isolated groups of people.

A highly enjoyable, and very original piece of science fiction, with a brilliant plot-twist of an ending, set in a future world where corporations put profits before the interest of the inhabitants of two planets.

Bacigalupi - Ship Breaker
Haldeman - All My Sins Remembered
Aldiss - Non-Stop
Morrow - Is this the Way the World Ends?
Stephenson - Snow Crash
Posted by Resolute Reader at 8:18 am