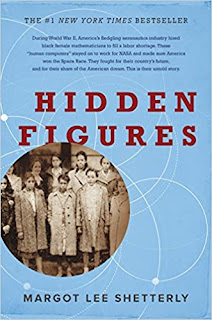 By coincidence I started reading Hidden Figures as the recent Black Lives Matter protests erupted in the United States and rapidly spread globally. Those demonstrations quickly went from anger at the murder of George Floyd to generalising about contemporary racism and the history of colonialism, imperialism, slavery and many other injustices. I decided to read Hidden Figures after seeing the  2016 film of the same name. I'm glad I decided to as while the film is inspiring and entertaining, out of necessity, misses much detail and compresses a longer timescale and the experience of many women into a short story.

Margot Lee Shetterly is the daughter of a black NASA engineer. She grew up knowing the stories of the women who played a crucial role in the early NASA space programme. The women cranked out calculations, checked equations, researched solutions and helped run simulations of aerodynamics, trajectories and much else. They were known as "computers" and they were all women, and most of them were black at a time when few women of any colour were employed in workplaces. Their names and crucial roles were almost forgotten until Shetterly's book was published and they started to gain limited recognition - though Katherine Johnson who is one of the focuses of this book eventually got a Presidential Medal. But there were many more. Shetterly writes that she "can put the names to almost fifty black women who worked as computers, mathematicians, engineers, or scientists at the Langley Memorial Aeronautical Laboratory from 1943 through 1980, and my intuition is that twenty more names can be shaken loose from the archives with more research".

The movie implies that the story begins with the US space programme, but actually the story of the black women "computers"  begins during World War Two when a desperate need for labour meant the US government reached out to employ women.

Interestingly the film portrays the success of the women as being solely down to their personal force of will. But Shetterly's book makes it clear that they were able to do this in the context of wider social movements. In particularly the famous occasion when black trade unionist, socialist and civil rights activist A. Philip Randolph threatened to march on Washington with 100,000s of black activists if the government did not employ black workers in war industries. The opening that was won allowed the computers to be employed at Langley for the NACA initially on aircraft and later space vehicles.

This is not to decry the struggle by the women as individuals. They challenged racism and sexism, as well as the limitations that resulted from their own backgrounds. Women in general and black women in particular were not expected to have jobs like these. At best some one like Katherine Johnson who went on to play a particularly important role at NASA might be teachers. Johnson, for instance, went to do Mathematics at university, having to hide her marriage and quitting when she got pregnant. The War, then the Space Race however sucked her and thousands of others into the machine. While there were hundreds of women like Johnson, Shetterly builds her book around Johnson and two other key figures, Dorothy Vaughan (the first black woman to manage staff at the NACA) and Mary Jackson who was the first engineer. Other women's stories are told, with similar tales of overcoming racism, poverty and inequality, but it is these three key figures who tell the story of the women computers and the roles they play at NASA.

The book is inspiring, and it demonstrates that collective and individual struggles often go hand in hand. It also showed the way that racism and sexism reduces everyone - one of the women fights to be allowed to study at a white only college. On arrival she is dismayed to see that the school is as dilapidated as the black schools she already knows. The white women at NACA and NASA have to fight sexism, even as some of them are expressing racism to their black colleagues who are fighting a double burden. Shetterly points out that many people had no idea that women worked at NASA, never mind black women in such crucial roles. That said Hidden Figures also shows that many people didn't accept racism, and that black and white people worked and often relaxed together in NASA's social events. However mixing outside work was less common. Housing was segregated and black families in particularly found it hard to get places to live.

The hopeful conclusion, which rightly shows that the lives of individuals like Johnson, Vaughan and Jackson, laid the ground for other black women to play their role in the space programme, seems inadequate when we look at the death of George Floyd, or the way that racism means that black people are more likely to be unemployed or die from Covid-19. I also found the book difficult to read in places, as it skipped back and forth in time, or between the different viewpoints of characters. That said this is a must read for people interested in the struggle against racism and inequality, the space race and science in general.