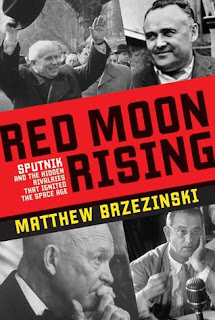 This is a very readable, interesting and entertaining introduction to the earliest years of the Space Race. It concentrates on Russia' development of rocket technology and the run up to the launches of the first two man made objects to orbit the Earth in late 1957.

What makes the story interesting is less the technical aspects to this enormous scientific breakthrough, but the political and social contexts of the early years of the Cold War. What is clear from Brzezinski's book is that neither the Soviet Union nor the United States had any particular interest in reaching space. A few scientists and engineers, such as the former German scientist (and Nazi) Werner von Braun, did. But they were a minority within the rocket programmes and certainly did not have much influence on the politicians and political decision makers.

Russia's missile program arose as a result of their inability to compete with the military advancements of the United States. Following on from the doctrine of the Second World War, the US was banking on growing its military might based on air power. Hundreds of massive bombers could threaten the Soviet Union with nuclear annihilation through their long range. Key military and political figures in Washington hyped up the idea of the Soviet Union having a comparable air force and the US engaged in a bomber arms race faced with the threat of nuclear attack.

But this was built on lies. The USSR didn't have the bomber fleets and had no ability to build on a comparable level with the US. They could and did begin to develop nuclear missiles. These they felt would enable them to threaten the US at a much reduced cost. Khrushchev in particular needed the financial leeway to offer some improvements and reforms to Russia's population.

When Sputnik was launched, it terrified the American people and shocked the US government to the core. In hindsight, its clear that President Eisenhower came close to losing his position as the media and people sought a scapegoat for the new threat to the country. Indeed, his handling of the crisis, is a textbook example of how not to deal with the press.

By banking on bombers, the US had starved their missile programmes of cash. This meant their technology was far behind that of the Russians, even through they had the best German scientists and the majority of the Nazi rocket technology. One fascinating aspect to this, is how the US military were desperate to avoid von Braun and his colleagues even thinking about going to space - they tasked someone with the job of checking they didn't fuel the final stages of test rockets so that the scientists couldn't orbit something "accidentally".

Sputnik was laucnhed as a propaganda tool. It almost didn't happen, because as was the case in the US, those holding the purse strings were only interested in the military potential for rockets. The resultant propaganda coup (and the follow up when they launched a dog on the second rocket) stunned the Russian leadership as much as the Americans, though Khrushchev recovered faster.

The book finishes rather abruptly, with the US finally getting a much smaller satellite into space. Brzezinski implies that once the US had got over its shock, it rapidly set about the scientific and civilian conquest of space, while the Russian's languished with the death of their key rocket scientist. I felt this was a little limited, particularly given that once they had reached the moon, the US clearly decided it had won the space race and give up on serious manned space exploration. Because the US was engaged in a Cold War confrontation with Russia, money for its space programme dried up rapidly when that competition was won. The success of the US moon shots must be contrasted with the complete abandonment of the field from the mid 1970s onward. But this is a minor criticism of a very useful and interesting book on the history of the early space race which locates it in the midst of military and economic competition, rather than the desire to understand the universe.

Scott & Leonov - Two Sides of the Moon
Posted by Resolute Reader at 4:52 pm