Naomi Mitchison - Memoirs of a Spacewoman 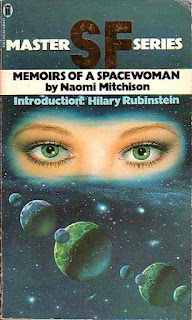 Naomi Mitchison seems to have led an extraordinary life. Born into an English establishment family, she was the younger sister of the communist scientist J. B. S. Haldane. Married to a socialist politician, she certainly seemed to have shared some of their politics. She seems to have mixed from an early age with scientists, Niels Bohr, apparently gave her a tiny jug for her dolls house and she is thanked in James Watson's Double Helix.

Both these aspects of her life come through in Memoirs of a Spacewoman, her 1962 novel that is perhaps her most well known. To the modern reader of science fiction it seems a little strange. There is little detail of science and technology, in this future, humans can travel to far galaxies and communicate, often telepathically with alien species. Mitchison is not particularly concerned with great plot arcs, though it is not quite true to say, as it does in the introduction to my edition, that there is no plot at all.

The story centres on Mary, the spacewoman of the title, whose job is to establish communications with alien species, in order to further humanities understanding of the universe. Most of the chapters concern Mary's encounters with various alien flora and fauna, which she tries to understand and communicate with. On occasion I was reminded of the stories in James White's Sector General series which deals with a space-going hospital that cares for aliens. Mary, like the characters in the Sector General, have to try and understand alien behaviour as well as completely foreign ecologies and metabolisms. Often the solutions arise  from looking at available evidence in a non-human way.

What makes Mitchison's book different, and the reason it perhaps shocked many on its original publication, is that it is fairly uninhibited about sexual changes in the future. Mary, for instance, is made pregnant by a Martian in one chapter. Martians communicate through the manipulations of different parts of their bodies, including their sexual organs. Such manipulations are, apparently, very subtle and often require touch. The consequences are unusual, as Mary explains:

"Before I knew where I was, I was beginning to feel elated. I wanted to pass this on as quickly as possible. I reached for his sexual organ and began to communicate on that. It seemed most peculiar that in its non-communication aspect it should have any effect on a Terran."

If this passage should make the reader snort with derision, I would urge caution. Mitchison's book is playing with ideas that are far more than a science fiction story. Her future society, is a very vague, post capitalist, post-scarcity society (there is a passing reference to revolution) and humans have very different relationships. Men and women are clearly intellectually and economically equal, at least in the space service that Mary works for. Details of the future society and peoples' lives are deliciously vague, meaning that the book has dated very little when compared to early novels.

What is fascinating though, is that the book precursors some of the Feminist writings that developed in the 1960s and 1970s. It is, in many ways, revolutionary, and not just for the sex. But it is also somewhat old fashioned in terms of gender roles. Women are thoughtful, caring and kind, in part because of their child rearing role, a role that seems to remain the remit of their sex.

This is a book that should be rediscovered by a new generation of science fiction fans. In its exploration of future worlds, sexuality, and the emotions felt by scientists studying alien ecologies, it has much to offer. It is also perhaps, a fascinating insight into the way some people were thinking "out of the box" at the beginning of the revolutionary 1960s.
Posted by Resolute Reader at 10:02 pm