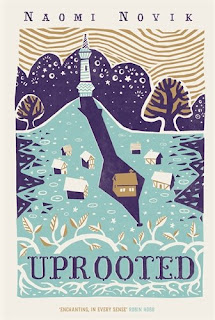 This delightful fairy-tale is both deeper and darker than it seems at first reading. Set in the classic trope of a small medieval but magical kingdom, the heroine Agnieszka ends up being selected by her local lord (known as the Dragon) to spend 10 years in his tower serving him. As Agnieszka explains in the opening paragraphs, their Dragon doesn't consume his sacrifices. They stay with him while he fights the Wood, a dangerous evil wood land that continuously tries to encroach on human lands and kills, transforms and disappears those who get too close to its branches.

Agnieszka is, of course, no normal village girl. Her relationship with the Dragon is less servile than he has come to expect from previous servants. Her own magical powers grow in new and inexplicable ways. Naomi Novik does a good job of weaving several tales together. There's the story of the Dragon himself, whose lordship seems all powerful, but when it comes to the machinations at the King's court he is of little importance. There's the various courtly intrigues and international politics and, at the heart of it all, is the magical problem of the wood.

Being a fairy-tale Agnieszka has the answers, though she doesn't know it. She's just a girl from a small town and Novik uses some clever plot devices to highlight this. I particularly liked the description of the way that Agnieszka is treated by the rich, bored women at court, who trick her and snigger at her. It's a delightful scene when Agnieszka realises and fights back. The story of a young woman becoming aware of herself and her power is as old as the hills, but Novik places it into an interesting feminist tale that turns more than a few stereotypes on its head. Being a fairy tale there is a love-story, which I found unnecessary and distracting, but not intolerably so.

Ultimately the problem of the wood is about much more than a magical enemy at the heart of the kingdom. Perhaps it represents the evil at the heart of all Empires that must be rooted out. This clever and entertaining novel is an updated fairy-tale and will appeal to many different ages.

Posted by Resolute Reader at 4:00 pm