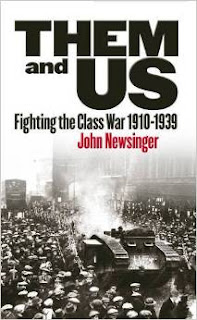 This short historical account of the class struggles in the United Kingdom during the early part of the 20th century is a tremendous introduction to a formative period for the British working class movement. John Newsinger is one of the best socialist historians writing at the moment and his books are excellent at describing struggle as well as analysing events. So while much of this book is given over to describing mass strike movements, Newsinger also explores the varied forces that led to these being successes or defeats for the workers. In particular, for this period, this means examining the growth (and nature) of the British Labour Party, and its behaviour in its first governments; the formation and activities of the Communist Party and crucially the activities of the trade union leadership.

In various ways, all of these were found wanting. But what was not lacking during this period, was the ability of ordinary workers in Britain to organise, to fight back and the act in solidarity with other workers, often in the face of huge repression and violence from the British state and the betrayals of their so called leaders.

Let's have a look at one example. In 1911 an enormous strike wave swept the country. Dockers, seamen, railway workers took part in mass, militant strikes. Whole communities fought back. In Liverpool, the local newspaper reported "residents in many instances took sides with the rioters against the police, throwing bottles, bricks, slates and stones from the houses and roofs."

Newsinger shows how the ruling class was terrified of revolution.


"George V [wrote] to Churchill to complain of 'the half-hearted employment of troops... they should be given a free hand and the mob should be made to fear them'.... In Liverpool meanwhile, the Strike Committee, chaired by Tom Mann... called a general strike, effectively closing the city down. Over 60,000 workers, men and women were out on strike. The Strike Committee was in effective control of the city... One Liberal Cabinet member, Herbert Samuel, wrote to his wife in a panic that 'Liverpool is verging on a state of revolution."

This militancy led the official union movement to try and take control. Their chief weapon was "fake militancy". As troops were mobilised to put the strike down, the unions made the strike official, but this didn't dampen militancy. At Llanelli military intervention led to two strikes being shot dead by British soldiers. But the use of troops didn't stop further workers coming out, and instead Lloyd George, the Prime Minister turned to Ramsey McDonald, the Labour leader and offered the unions a Royal Commission. This was enough to allow the unions enough to call the strikes off. As Newsinger notes, craven surrender was presented as historic victory.

This one example begins a pattern. Labour, desperate to prove that it could manage capitalism, was prepared over and over to repudiate strikes and sell out struggles. Ramsey McDonald has rightly been labelled a traitor and a scab for betraying his Labour colleagues and froming a national government. But in practice most of those in the Labour leadership were equally craven. Newsinger describes their sycophantic behaviour towards George V when they formed the first Labour led government, a government that saw public school graduates outnumber trade unionists in the cabinet. As Newsinger explains, Labour's reformism, its hope to gain small reforms from within the system, means it refused to challenge capitalism at all. Instead, when workers militancy threatened bosses profits, or even the stability of the system, Labour politicians were the first to support the status quo.

Close behind were the trade union leadership, who wedged between the workers and the bosses, time and again sided with the enemies of the workers. There are plenty of examples in Newsinger's book of their betrayals. Most obviously the 1926 General Strike which the TUC led so badly. Despite enormous solidarity, huge support for the strike and growing militancy the TUC did everything they could to dampen spirits and reduce self-activity. As the government increased the pressure, imprisoning militants from the Communist Party and putting more and more pressure on the union leadership, the TUC took the first chance they could find to pull the plug. 100,000s of miners' were left to fight alone and thousands of trade union activists lost their jobs because the TUC was more afraid of its members' militancy than the capitalists.

Where rank and file organisation did exist, we see time and again independent leadership helping to lead workers to victory. One organisation that should have been a central part of this was the Communist Party. Newsinger explains how the CP was hamstrung initially by its origins in the sectarian British left who often saw union struggles as a distraction. But the CP increasingly became tied to the needs of Russian foreign policy and in 1926 built enormous illusions in left-wing trade union leaders. Their betrayal came as a shock to the communists who had failed to prepare militants for such an eventuality.

Newsinger follows the struggles through the tough years of the 1930s, describing the powerful Unemployed workers movements that again, shook the ruling class, to the heroic anti-fascist movements that stopped the British Union of Fascists from becoming like their counter-parts in Italy and Germany. Through the whole period he rescues forgotten struggles to inspire us today - the mass busworkers strikes in London in 1935 led by rank and file workers, the huge unemployed protests in South Wales in the same that saw up to 300,000 on the streets helping to beat back further government cuts. The movements in solidarity with Republican Spain, and earlier the Russian Revolution.

Newsinger's book is excellent, though I felt it missed some important parts of the struggle. Oddly there is no mention of the 1921 struggle by Poplar Councillors against Tory attacks that saw the Labour councillors including George Lansbury jailed for their defiance. Newsinger is rightly critical of Labour's betrayals, but the Poplar struggle does show councillors who are prepared to fight can help build movements that can eventually defeat the government. Similarly there is little here about the mass anti-war movements that developed before both World War One and Two.

Nevertheless, Newsinger covers an extensive period and draws out many nuances of the class struggle in a short book, a period when workers terrified the British establishment who seemed to have spent 25 years fearing revolution. For activists today there is a great deal of material here to inspire us, and teach us valuable lessons for the fight against austerity, capitalism and racism today.

Posted by Resolute Reader at 2:18 pm

Thanks for this review. It's a period that doesn't seem to get much 'press' so I look forward to reading it.