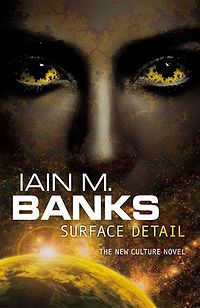 Iain M Banks' latest culture novels is somewhat of a return to form, though it still suffers somewhat from the bloated feel of his more recent SF novels.

At the heart of this novel is the concept of virtual hells. Sufficiently advanced civilisations, Banks postulates, could create virtual environments for minds to be introduced to. If you wanted to, you could introduce them to a horrific environment, that would, for the person subjected to the horrors of hell, be indistinguishable from reality. Whether or not this is an acceptable activity for civilisations to do is something that divides the galaxy. The Culture, Banks' is enormous, anarcho-communist civilisation is opposed to such hells, and is fighting a simulated war. The outcome of this war will determine whether or not virtual hells can continue.

There is much here for Banks to play with, and he does so well. One character escapes from a virtual hell and then uses his knowledge to identify and expose what is going on, quite literarily under the surface of society. He is hailed a hero by some but encounters bribery (and worse) from those politicians who owe a certain amount of their political and financial security to the existence of torture and suffering.

The virtual battle against Hell threatens to break out into reality and this combines with powerful interests amongst some of those civilisations who have not yet become part of the Culture, but want a piece of the economic action.

This is not the easiest book to start the culture series from - it has many references and potential links to earlier novels. While it is also long and complicated, it is much slicker than some of Banks' more recent Science Fiction. If you have enjoyed all or part of the earlier Culture novels, than this is worth reading, particularly if you like the spaceship Minds.
Posted by Resolute Reader at 9:39 am

A Question Of ITIL said...