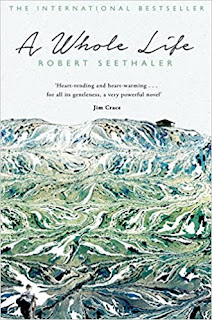 Describing, quite literarily "a whole life", this lovely short book tells the story of Andreas Egger a "mountain man" in the Austrian Alps. Beginning with a cruel childhood on a farm Andreas spends almost his whole life in the mountains, mostly working for cable car companies as the tourist boom takes off in the 1920s, but then as a guide. His only interruption is a brief period on the Eastern Front during World War Two, and a longer period as a Russian prisoner of war. The mountain is Andreas' life: it forms his sustenance, his home and is also the mechanism for his courting the love of his life. His life, as the reader discovers, is in a very real way written into the hills themselves.

It is difficult to say more without ruining the book. But not much else needs to be said. This is a delightful, poignant tale of how we are shaped by the world we know and how we are buffeted by forces beyond our control. But it is also a celebration of our capacity to love and to survive. When I finished A Whole Life I had to double check it was a novel, and not a very clever biography. That perhaps the greatest compliment I can pay it. Read it.

Posted by Resolute Reader at 10:52 pm