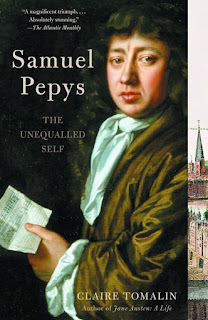 When reviewing Claire Tomalin's biography of Samuel Pepys it is difficult not to fall into the trap of reviewing Pepys himself. As Tomalin points out, Pepys left an unparalleled and extremely detailed documentary record of a period of his life. It was also an unashamedly honest account, and as such we see Pepys warts and all. Those, like me, whose knowledge of Pepys' life and diary was limited to the accounts he made of the Plague and the Great Fire of London will find Tomalin's biography illuminating. As Tomalin draws out, his life before and after the diary, straddled a period of English history that saw momentous changes. As a young man, Pepys was at the execution of Charles I, he began working at the Naval Office during the Cromwellian wars with Europe and than for Charles II and James II after the restoration.

But Pepys' diary and Tomalin's diary also show a man who we would find deeply unpleasant today. He hit his wife, and recorded it in his diary. He visited prostitutes and slept with the wives of subordinates who hoped to get promotions. While acknowledging that Pepys lived in very different times, it is deeply uncomfortable to read about his sexual exploits, which included targeting of children. As Tomalin herself writes:

Young girls were his regular targets, some apparently pre-adolescent, like 'little Mrs Tooker', the 'very pretty child' he made fee with in his lodgings during the plague winter of 1665. She seems to have been accustomed to such treatment; there was no age of consent, and her mother was perfectly willing to hand her over and she to cooperate with Pepys; but to us she appears as a child victim, and by today's standards what he did would have earned him a prison sentence. In his own household he launched himself routinely on the young women who served as his wife's companions.

Reading Tomalin's book I found myself drawn into an incredibly detailed account of Pepys' life and times. But the groping, sexual assault and pursuit of young women and girls makes for difficult reading at times. I couldn't bring myself to agree with Tomalin when she writes that "however sorry you feel for some of the girls and women he pursued, you rarely lose all sympathy for him. He so often makes a mess of his attempts at wooing..."

Nonetheless this is a compelling book. Tomalin shows us the world of a man rising, through the 17th century, from very lowly origins to the very heights of power. While Pepys' never becomes super rich, he is very wealthy and is in a position which allows him to give others access to wealth and power. Today we'd see corruption in Pepys' granting of contracts for cash, or placing friends and family members in jobs, but then it was an accepted practice.

Tomalin argues that Pepys was more than someone writing a diary. He was a gifted author with a talent for observation and perhaps a compulsion to record everything. She sees him as a figure of the scientific enlightenment, determined like the scientists he knew in the Royal Society, to study and record himself. It is notable, Tomalin highlights, that Pepys did not destroy his diaries. In fact she thinks it likely that he took time out to read it cover to cover, before cataloguing it with his other books and including its shorthand guide. The books and the diary, were left to Oxford University where eventually it was published, firstly without the sex and then, much later, in full.

In writing a biography of Pepys, Tomalin has source material that other biographers would kill for. As a result the pace and detail tails off during the 34 years of Pepys' life post-diary life - Tomalin has to use other sources to draw out details, for instance about his relationship with Mary Skinner (Mrs Pepys) after the death of his first wife. Pepys stopped writing a diary because his eyesight was failing, though he never went blind. Tomalin also notes however that when in later years he began a brief journal during a trip to Tangiers, the quality of his writing was not the same. Perhaps he'd lost his enthusiasm, or his eye for detail and desire to record everything.

It is hard, of course, not to be pulled into a man's life when you are so intimately connected. Tomalin's work is one of the best biography's that I've read. But I think I should emphasise that this is not simply because of the material she has at her disposal, or the particulars of Samuel Pepys' life - rather it is because she weaves this into wider events giving us a real insight into a rapidly changing period of British history. It's a wonderful read, whatever you end up thinking of Pepys himself.

Posted by Resolute Reader at 8:19 pm