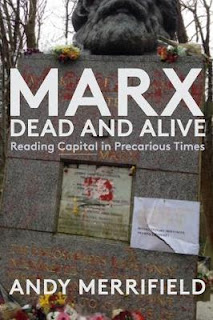 Karl Marx's Capital is a book that stays with you. Its multi-layered exploration of capitalism is one that repays study, but it is also a deeply human work, one that rages at exploitation and oppression and seeks to explain the world so that its readers can change it. It is also a book that remains with you - a book that can change your life.

Andy Merrifield is someone whose life was changed by Marx and Marxists. His exploration of Capital begins with a visit to Highgate Cemetery in the aftermath of the most recent attack on Marx's gravestone. In seeking to understand this event he explores the origin of Capital and what the book tells us. Marx was, Merrifield explains:

the intellectual champion of the underdog principally because he was one. He learned about the brutality of capitalism from political activism and mammoth reading sessions in the British Museum; yet his knowledge of working-class domestic oppression came firsthand, was lived out. A prophet of genocide? Give me a break.

What Marx is up to early on in Capital is something today we might call coding. He is programming capitalism, and reading him is our first attempt to download the critical app he's created for us, the conceptual software that allows us, step by step, contradiction by contradiction, to trace out capitalism's whole evolutionary movement, its value hieroglyphic.

In this short book Merrifield explores how Marx wrote Capital, and the influences on him. Merrifield isn't the first to point out Marx's debt to various authors, like Balzac, nor interpret Capital as a great work of literature. Despite Capital being portrayed as a dry work of economics, Merrifield highlights, for instance, the "sheer number of voices we hear talking". These came from the reports and eyewitness accounts that Marx devoured in the Reading Room of the British Library - on those days his coat hadn't been pawned.

But the meat of Merrifield's book is to look at Marx's ideas in Capital. In particular he draws out how the book's description of the dynamics of capitalism is so relevant to today's world. There's a particularly poignant moment when Merrifield quotes Foxconn defending using school children as workers in its factory. Foxconn's argument is that the children get valuable experience for their future working lives. Merrifield digs out a similar quote from Capital when a Sheffield steel mill owner celebrated how "Boys must begin young to learn a trade" and, points out Merrifield, "their station in life".

Merrifield shows how some of the key arguments in Capital are enormously important today - the way, for instance, that capitalism creates a pool of unemployed workers, and a huge section of the working class that might never work formally, relying on informal employment or illegal actions to stay alive. This, Marx shows, comes in part out of the way that capitalism uses machinery - to replace human labour, at the same time as undermining capital's own viability.

Today's debates about precarious labour - zero hours contracts etc - are nothing new. In fact Merrifield rightly points out that all work under capitalism is precarious. Booms and slumps cause unemployment to rise and wages to fall (or occasionally rise). Capitalism, Merrifield says:

creates a relative surplus population who feel the brunt of capital's business cycles, sucking people in when the economy soars, evicting them when it dips. Ditto now in the city, capitalism's new factory of valorizing capital, where accumulation's messenger boy is interest-earing capital circulating through spaces, searching out hose titles to future ground rents. The process renders workers superfluous, not only from work but from the totality of living space, displacing from dwelling pace as it downsizes the workplace.

These brief lines hint at some of the deeper topics that Merrifield addresses - ground rent, and the economy of the capitalist city. The book isn't long enough to explore these to satisfaction, and Merrifield encourages the reader to dig out David Harvey to satisfy any curiosity they might have.

I was disappointed though that he didn't draw out more about contemporary struggles - those precarious workers who do organise, strike and protest - from delivery drivers in Europe, to Amazon workers in America and Foxconn labourers in China.

I however agree that we must never lose sight of the fact that Marx's book is a revolutionary work, and the most important thing that we can do today is learn that lesson. Merrifield suggests that we need to emulate Marx in building underground revolutionary organisation; groups that can relate to those forgotten masses, especially as the factories and workplaces are harder to find. While I agree that we need, desperately, bigger, stronger, revolutionary parties. I'm less clear on the centrality that Merrifield places on underground organisation. At a time in the UK when hundreds of thousands of socialists are looking for a new home following the end of Jeremy Corbyn's leadership, a secret network would seem unable to relate to them. That said, these are quibbles of organisation. Merrifield is absolutely right to demand that socialists organise, publish newsletters, newspapers and zines.

Perhaps my greatest disappointment with this interesting book is the lack of discussion of Marx's ecological thought, something that comes through so strongly when re-reading Capital in a time of pandemic and environmental crisis. Sadly Merrifield doesn't discuss what Marx had to say about capitalist agriculture, or the relations between society and nature. The precarious times we live in are not simply about short-term work contracts but also about the very precarious situation that human society finds itself in.

Nonetheless, Andy Merrifield's book is interesting and entertaining and I hope it will lead to many more activists reading Marx and building socialist organisation. There lie all our hopes.

Posted by Resolute Reader at 10:45 pm