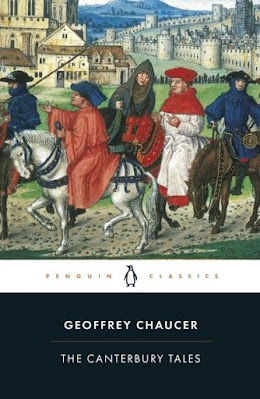 I embarked upon reading The Canterbury Tales with a little trepidation. Oddly I was inspired to read it by my enjoyment of Dan Simmon's science fiction novel Hyperion which uses Chaucer's model of a disparate collection of travellers telling their tales to tell his own epic story. Having heard that that Nevill Coghill's translation made it all very accessible I embarked upon my Chaucer journey.

How glad I was. Coghill's translation makes the book readable, but most importantly it brings it alive. Here are men and women, rich and poor, tired and pampered, brusque and joking, telling tales that illuminate their life, times and beliefs. The stories range from religious morality tales, to epics of chivalry and comedies of village life. There are some aspects to the stories that do jump out to the modern reader. What people in Chaucer's time no doubt saw as sex comedies are often stories about people trying to trick women into sex by pretending to be someone else in the dark. There are not a few scenes of sexual assault dressed up for laughs. There is also a deeply anti-Semitic story of Jewish blood libel.

On the other hand Chaucer also shows us the ways that women and Jewish people were more than just oppressed groups. The famous "Wife of Bath" story is often considered a sort of proto-feminist tale, but I read it as a exemplar of how women strived for their own power in a system were wives were mere extensions of the husband. The Wife of Bath doesn't just use her sexuality to strengthen her position, she also challenges the rest of the travelling band about the way women are treated and what they themselves want.

There are great moments of comic genius too. The tales of the Friar and Summoner are based on mutual loathing between the two classes and Chaucer happily plays with prejudices about different peoples - the Friar who "knew the taverns well in every town and every innkeeper and barmaid too, Better than lepers, beggars and that crew" or the Cook who has "an ulcer on his knee" but made blancmange "with the best" stands in for every grubby cook the world over.

While The Canterbury Tales is a fascinating and entertaining collection of stories, it is also a parable that reminds the reader that everyone has their station in life. We laugh alongside the characters at the foibles of each class of person, but the characters are summed up by their roles and jobs. The Wife of Bath might be striving for a stronger say in her life, but she is always going to be a merchants wife. The prioress who learnt French "at Stratford, near bow" will never be at the Royal Court and the lower orders will always be lower orders. The pilgrimage that they embark upon is a great leveller. But only for a brief order, when they share stories that remind them of the real world.

There is the briefest of mentions that sometimes things are different, when Chaucer makes a brief mention of the Peasant's Revolt in the text. He refers to the infamous moment when rebels massacred Flemings in London during the uprising, blaming Jack Straw's men. Its a deliberate libel on those who wanted a different world, but its inclusion at least references that there were, at various points, demands for change. Chaucer's a social conservative, but the world he faithfully reflects was not quite so simple.

Posted by Resolute Reader at 1:49 pm