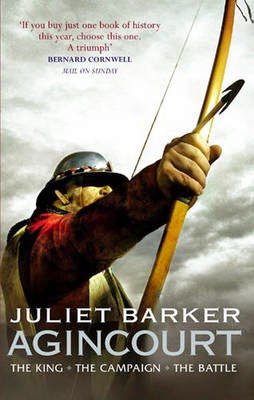 The Battle of Agincourt has been much mythologised by the English. Part of the fault is Shakespeare's who used it to create an image of Henry V as a heroic, brave and above all, patriotic king. But there are others too, not least Churchill, who according to Juliet Barker, urged Laurence Olivier to make a film of Shakespeare's play to prepare the English people for the Normandy invasion. The removal from that version of the plot against Henry help create a sense of a unified country going to war against France in everyone's interest.

With her typical attention to detail and scholarship Juliet Barker restores the real story of Agincourt. Here are knights with armour rusted from a long march in the rain, trying to avoid engaging the French to early. Here are bodies stripped naked on the battlefield as victorious English soldiers took anything of value from them, before the local peasantry removed what remained. Here are also the English army who suffered so badly from dysentery that they cut their trousers off to improve matters before the battle, and Henry's massacre of French prisoners in the aftermath of the battle when thinking a French trumpet call meant counter attack was imminent.

In my reading of Barker's story, the English come across as incredibly lucky. On two major points popular knowledge matches with historical evidence. The English were lucky in their leader. Henry V was a brave, clever and experienced leader who was able to win his army's hearts and minds. He was also a clever strategist. Secondly the importance of the English longbow was a deciding factor. But Barker also emphasises the weaknesses of their opponents. The French were clearly too confident that their numerical strength would carry the day for them. This also caused a crisis of leadership as all the knights wanted to be in the thick of it. Few, if any, were prepared to stand back and lead. At a key point the French failed to take advantage of their battle field position and allowed the English to move forward, protecting their flanks from the French cavalry and bringing their enemies into bow-range. The heavy over-night rain might have rusted the English armour, and threatened the strength of their bow-strings. But it turned the field into a quagmire that disadvantaged the French mounted knights tremendously. Over-all Barker seems to imply that on a different day, in different weather, and with a slightly less self-obsessed French leadership, English history books would remember Agincourt as the day that the King was killed or captured. English pluck and genius played its role, but so did luck and the enemies' mistakes.

But the strength of Barker's book is not actually just in her description of the battle. The historical context she gives helps explain not just Henry's invasion, but the subsequent English occupation of France. A period she covers extremely well in her later book, Conquest. But she also shows the way that Henry's meticulous planning, his well planned mobilisation and the enormous scale of the invasion made this invasion very much a national event. Through their financial contributions, their involvement in the invading army, and their support for Henry's war the population were buying into the war in a very real way. The tremendous popular support meant that Henry's victory celebrations were both lavish and enormous, as ordinary people joined with him to celebrate and give thanks to god. But this also helps to explain why, when Henry's son Henry VI failed to maintain English possessions in France, the population grew enormously discontented.

Like all of Barker's books this is a well researched, but eminently readable account of a battle that had both a enormous historical impact and helped shape an English consciousness. Both at the time, and in later centuries. While historians and politicians may overlook Henry's more unsavory aspects, Barker isn't afraid of drawing them out. In doing so, she shows that Agincourt very nearly wasn't the English victory we were all taught at school, and that what we were told by our history teachers was only half the story.