Anil Ananthaswamy - Through Two Doors at Once 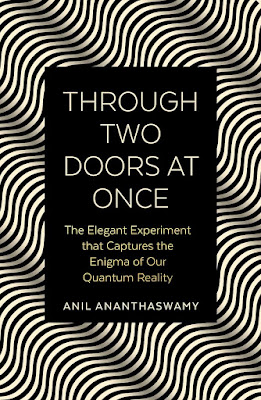 Young's double slit experiment was perhaps the most fascinating piece of practical work I did when studying physics. As an experiment its perversely straightforward, yet its implications are so utterly profound that scientists have been amazed, inspired, confused and angered by interpretations of its results. There are plenty of excellent videos on the internet that demonstrate the working of the experiment and some of its conclusions - this video from a 2019 Royal Institution Christmas Lecture shows the experiment at its most basic.

The double slit experiment essentially shows that light can behave as both waves and particles. As Anil Ananthaswamy's book shows, the experiment provided evidence for both sides in the debates that were taking place in the 19th century about what light was. But in the 20th century they helped launch the new, and perplexing, science of quantum mechanics.

For those of us fascinated by the experiment and its scientific and philosophical conclusions, Ananthaswamy's book is a good read. He covers the history of the double slit experiment in the early chapters but quickly moves on to a more detailed study of extensions of the experiment. Some of these are theoretical experiments, concocted by scientists to explore the philosophical and scientific ramifications of wave-particle duality, others are incredibly complex experiments that require high precision equipment and years of research work by scientists.

The ramifications are extremely difficult to comprehend. For instance, a team of scientists tested a version of the double slit experiment between the islands of La Palma and Tenerife. The locations were chosen to reduce light and air pollution and allow a long distance between a receiving telescope and the source of light. This version of the "delay-choice quantum eraser experiment" showed that "events at Tenerife, in our usual way of thinking, happen later in time, yet still influence the outcome of measurements at La Palma, even though each measurement a La Palma is done and dusted well before the partner environment photon reaches Tenerife." As Ananthaswamy says, "language fails us at this point. Here and there, past and future don't quite work".

What the double slit experiment does is to give us an easy insight into the perplexing and counter-intuitive world of quantum physics. Most of the book is actually Ananthaswamy exploring different explanations and interpretations of what is taking place. Ever since the early days of quantum science there have been different explanations - some of the world's leading scientists, including in the early 20th century figures like Einstein - found the implications of the science unsettling. Ananthaswamy shows how there has been a tendency among the physics community to follow a particular explanation, the so called "Copenhagen Interpretation". But for more recent scientists this is proving, at best, in adequate. The various alternative explanations that Ananthaswamy explains, usually through interviews with the scientists involved, are breaks with Copenhagen to various extents. Some of these have profound philosophical interpretations - such as the many world's theory. Others simply highlight how little we know. Ananthaswamy doesn't come down on any particular side of the discussion, rather presenting each equally and drawing out links between the theoretical ideas.

Part of the problem that Ananthaswamy, and every other populariser of quantum mechanics has, is that the conclusions of experiments like the double slit defy understanding. As he explains when discussing a thought experiment known as Hardy's Paradox, "the paradox arises, because we are talking and thinking classically of space and time, of particles taking this or that path and reaching this or that detector. Nature has its own inimitable way of doing things." Later, when interviewing theoretical physicist Roger Penrose, Ananthaswamy quotes him as saying "quantum mechanics is a provisional theory".

I liked this quote because I think part of the problem is that we approach quantum mechanics from an understanding of the world we live in (my first introduction to the double slit experiment involved a teacher discussing buses entering tunnels). This is wholly inadequate when trying to understand events where time and distance are irrelevant, or different. I wonder if we need a complete transformation in scientific approach before we can quite grasp all the implications of quantum physics and wed them to our understanding of the macro world.

For readers who have some physics in their background this book is a good introduction to the debates around quantum mechanics, though in places it is a little hard to follow what is going on as Ananthaswamy has to simplify explanations a great deal and, rightly, he tries to avoid including too much mathematics. I enjoyed the book and was fascinated to see how much quantum mechanics has moved on since I last studied it in the early 1990s. I wouldn't like to pretend I understood everything in the book, but that's a consequence of the material not the author. Readers also benefit because the book is based in large part of interviews with the scientists themselves, though sometimes this obscures rather than clarifies. One sad result of this was to realise how few women are leading figures in this field - only one of the dozens of interviews is with a female scientist Dr. Urbasi Sinha. Hopefully the popularisation of the science in this very readable book might lead others to follow in her footsteps and further uncover the quantum world.

Greene - The Elegant Universe: Superstrings, Hidden Dimensions, and the Quest for the Ultimate Theory
Clegg - Gravity: Why What Goes Up, Must Come Down
Clegg - Infinity: The Quest to think the Unthinkable
Johnson - The Ten Most Beautiful Experiments
Cathcart - The Fly in the Cathedral

Posted by Resolute Reader at 4:11 pm