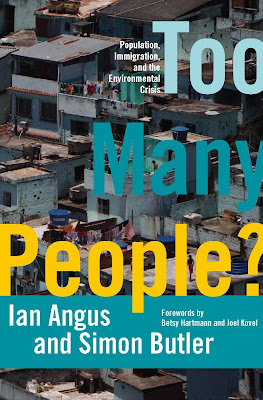 I first read Ian Angus and Simon Butler's Too Many People? when it was being prepared for publication in 2011 and was happy to endorse it then. Sadly, in the decade since it was published, the issue of population, immigration and the environment has not gone away and so I picked it up again to refresh myself of its key arguments.

Angus and Butler are both eco-socialist activists and authors. This book is simultaneously a critique of "over-population theories" and an argument about the type of politics that environmental activists need if we are to stop irreparable damage and degradation to ecological systems. But this is more than just polemic, it is a detailed refutation of the key arguments that have been associated with what might be called neo-Malthusian politics. Perhaps of particular relevance is that the authors take on the issue of migration in the context of environmentalism. Sadly the environmental movement does not always have the most progressive of record on these questions and so their centrality in this book is to be welcomed.

Over-population theory has many strands. At the most basic is the crude argument that more people equals more resource use. In the past this has focused on food, but today the argument extends to the degradation of the environment through the consumption of resources and the production of pollutants such as greenhouse gases.

The problem with over-population theories is that they tend to take crude correlations between (say) growth in population and increase in emissions and see a direct causation. As the authors' argue the problem with this approach is that it isolates one number from all the other factors. There are many problems with the approach, as the authors explain:

Other than the straight facts, another useful thing about Too Many People? is the way it deconstructs key planks of over-population theory. For instance there is a clear critique of why per-capita figures are so problematic for determining causes of environmental degradation. I particularly liked the example about the expansion of car use in this regard, which on a per-capita basis, has to assume children are driving when the real cause is the increase in cars per household, driven by social and economic changes such as more women going to work.

A second extremely helpful section is the critic of the IPAT equation. This argues that Environmental Impact I, equals Population time Affluence times Technology. The authors say:

One of the most powerful critiques of IPAT is... by Patricia Hynes who points out that IPAT treats the three elements P,A and T, as equal factors: increasing or decreasing any of them changes the environmental impact proportionately. That mathematical equality ignores the absence of equality in the real world... Hynes also points out that IPAT is based on a 'singular view of humans as parasites and predators on the natural environment.'

This argument is powerfully put in an appendix by economist Donella Meadows who explains her own turn away from explanations using IPAT after hearing activists from the Global South critique its implicit argument that they were as much to blame as the richest in society.

These arguments run through many right-wing environmentalist approaches and can lead to reactionary positions of questions like immigration. Here the crude populationist argument is taken from the global to the local, by suggesting that people entering wealthy countries like the UK from countries in the Global South lead directly to increases in environmental destruction. This crude mathematical trick, which takes per-capita emissions in one country and replaces them with per-capita emissions from another as people cross borders, is a vile insult to individual migrants, refugees and immigrants.

This view, which simply sees people as passive consumers of natural resources and producers of wealth will lead people to blame immigrants for destruction. Such odious politics belong to the far right, not those trying to fight for a sustainable world.

The real problem, as Angus and Butler articulate, is that environmental destruction is driven by production, not consumption. The problem with a per-capita approach is that it treats everyone equally. The worker in an office is not the same as the billionaire living on a giant yacht and nor are their environmental impacts. But more dangerously it ignores the way that pollution and environmental degradation arise out of production, and in particular capitalist production. Under capitalism, production is driven by the need to make profits, not to conserve resources or satisfy human need. As the authors conclude, populationist arguments obscure this:

The environmental crisis demands rapid and decisive action, but we can't act effectively unless we clearly understand what is causing the crisis. If we misdiagnose the illness, at best we will waste precious time on ineffective cures... The 'too many babies' argument is an important case in point... it weakens efforts to build an effective global movement against ecological destruction by dividing our forces, by penalizing the principal victims of the crisis for problems they did not cause. Above all, it diverts attention from the real sources of the crisis: an irrational economic and social system.

Arguments around over-population are accepted by many, even on the left, because they seem to fit a simple reality. But the truth is more complex and Ian Angus and Simon Butler's excellent book explains both the mistakes of the neo-Malthusians and the real cause of environmental destruction. As such the book ought to be read by every activists concerned with stopping capitalism's race to environmental disaster.

Angus - Facing the Anthropocene
Angus - A Redder Shade of Green: Intersections of Science and Socialism
Morland - The Human Tide
Malthus - An Essay on the Principle of Population
Pearce - PeopleQuake, Mass Migration, Ageing Nations and the Coming Population Crash
Meek (ed) - Marx and Engels on the Population Bomb

Posted by Resolute Reader at 7:53 pm