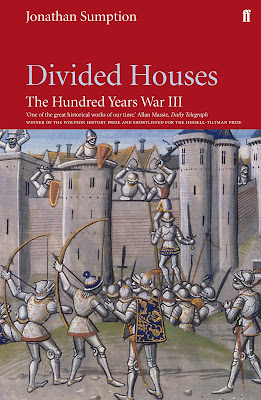 Volume three of Jonathan Sumption's epic history of the Hundred Years War deals with a neglected period of the conflict. This is the period of transition between the rule of the English kings Edward III and Richard II. It's unusual because it is not marked by epic battles but more complex interactions between states and armies. Now, the conflict between France and England spread to neighbouring areas - in particular Castile and Portugal, but also Italy and Flanders.

For the English though there was no respite. Edward III's initial military successes were never going to be sustainable, and by the second half of the 14th century he was facing repeated financial problems. The English' parliament's attempts to fix the shortages of cash, led to increased taxation. In turn, these taxes and the ongoing economic and political problems driven by the war with France, led to growing discontent that eventually exploded into open rebellion. The "Peasant's" revolt of 1381, is the centrepiece of the period for many historians. Yet Sumption demonstrates that the English Rising was very much part of a wider "Revolt of the Towns" that sure both rural and urban rebellion in Flanders and France. The causes were similar to that in England - Sumption argues that these

occurred against a difficult economic background: disease, depopulation and a deepening recession characterised by falling agricultural prices, industrial stagnation and a severe shortage of gold and silver coin. All contributed to the growing crisis of Europe's cities. The physical destruction wrought by war in England France and Italy and later in Flanders, Spain and Portugal aggravated the effects.

Sumption tells the stories of the various revolts well, giving a good sense of events. Perhaps more important though is the way he casts the rebellions as part of a Europe wide economic crisis. The similarities between the Rising in England and elsewhere, as well as the wider discontent across society is brought out well. As is the repression of the revolts that allowed the ruling classes of France and England to regain control. Here the similarities of violence and brutality are very clear.

In the years after the 1381 rising England came close to facing a significant invasion from France. For two years, from 1383 to 1385 the French managed to assemble a major military force. Had that force landed in England there could well have been a significant defeat for the English. Lack of funds, political chaos and organisational blunders meant that preparation for defence was negligible. In July 1385 as the French King prepared to invade, the king had left London for Scotland and defence was in the hands of those incapable of delivering. As Sumption says, "There was no attempt to organise coast-guards, to array troops inland or to set up warning beacons on hill-tops". The country could have been taken - and that it wasn't was down to luck.

At the other end of the country, French troops in Scotland found campaigning tough. Nonetheless Richard II still made a hash of the campaign. The invasion of England was put off following events in Flanders as the towns of Damme and Ghent were under siege. One of the strengths of Sumption's book is that he is able to tell the parallel stories from multiple locations that determined historical events. Simultaneous campaigns in Scotland, France and Flanders might make for a complicated story - but Sumption manages to keep the reader following.

Despite this I found the book much harder going that the first two volumes. Here the story is spread over a much greater geographical space. The interests of individuals such as John of Gaunt become entangled with the fates of whole countries. Keeping track of it all is hard for the reader, despite Sumption's best efforts. The book ends with the Truce of Leulinghem. This was a dramatic outcome of years of peace talks between the countries, but Sumption makes clear that the peace was very much still born. It failed to solve the underlying problems, and both the French and English kings used it as a breathing space to try and solve their own internal issues. In particular Richard II attempted to consolidate his power base by challenging his internal enemies.

Sumption finished the book with the defeat of Richard and the crowning of Henry IV in October 1399. The shock of the French at the news was "due in part to outrage at the idea of deposing an anointed king". This reflected real differences in government between the two countries. But a bigger problem was that the French firmly believed that Richard had been overthrown because he wanted peace. The scene was set, in French eyes at least, for further war.

Volume three packs a vast amount of history into almost 900 pages. It is not an easy read, while I found the sections on rebellion excellent, I was overwhelmed by detail - particularly in the chapters on Portugal. At times the sheer level of detail overwhelms the wider historical narrative. Despite this the book remains part of the single best historical account of the Hundred Years War. If you can stomach the length and detail, you'll want to read it.

Posted by Resolute Reader at 8:24 pm