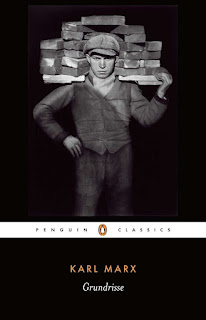 When writing down my thoughts on Karl Marx's Capital last year I pondered "how can you write a review of Capital?" The same thought comes to me now, though for slightly different reasons as I sit down to write about Marx's Grundrisse. The reason though is different. Capital is a complete work that has been read and analysed, debated and written about perhaps more than almost any other book of political economy (or even non-fiction). Grundrisse on the other hand is a sprawling mass of notes made by Marx as he worked through his own ideas - many of which would come to fruition in Capital itself.

The Grundrisse was never intended for publication, though much of it is actually quite close to a finished product and reading it I'm not sure that Marx didn't expect others to read it. In most places he doesn't appear to be writing solely for himself, but for other readers. The editor of my edition, Martin Nicolaus, makes this point:

Later he clarifies, "The Grundrisse and Capital I have opposite virtues of form. The latter is the model of the method of presentation, the former the record of the method of working." Mind you, Nicolaus then says "In 1858, not a single person in the world understood the Grundrisse except Marx, and even he had his troubles with it".

So reading the Grundrisse is a difficult task. Partly because Marx is working through complex subjects - money and capital - and partly because his method of working - to lay out the problem, break it down and then rebuild it to examine the whole again - is difficult to follow. But having its origins in Marx's notebooks means there is repetition, arguments that wander off at a tangent, and sentences that break up. There are also not a few places were Marx works through calculations and equations that are, frankly, unfollowable. I'll admit to skipping to the end of these pages.

That said, there is much of interest. But there is much that is opaque and difficult too. On occasion it felt like I was wading through mud hoping to stumble on an insight. Inevitably I would however find something useful and clarifying. As a result my notebook is full of hundreds of references and quotes.

Marx is also making a particular argument about the origins of money and capital and doing so from a point of view of deep acquaintance with all those political economists who've gone before. One of the most fascinating things about the Grundrisse (and indeed Marx's other work) is the author's absolute control of his source material.

Those who warned me there is no point reading these notebooks, will also miss out on arguments of clarity and importance that might be made elsewhere, but are eloquently made here. Take an early point that Marx makes in his own introduction:

When we consider a given country politico-economically, we begin with its population, its distribution among classes, town, country, the coast, the different branches of production, export and import, annual production and consumption, commodity prices etc.

It seems to be correct to begin with the real and the concrete, with the real precondition, thus to begin, in economics, with e.g. the population, which is the foundation and the subject of the entire social act of production. However, on closer examination this proves false. The population is an abstraction if I leave out, for example, the classes of which it is composed. These classes in turn are an empty phrase if I am not familiar with the elements on which they rest. E.g. wage labour, capital, etc. These latter in turn presuppose exchange, division of labour, prices, etc. For example, capital is nothing without wage labour, without value, money, price etc. Thus, if I were to begin with the population, this would be a chaotic conception [Vorstellung] of the whole, and I would then, by means of further determination, move analytically towards ever more simple concepts [Begriff], from the imagined concrete towards ever thinner abstractions until I had arrived at the simplest determinations. From there the journey would have to be retraced until I had finally arrived at the population again, but this time not as the chaotic conception of a whole, but as a rich totality of many determinations and relations.

Here, summed up are some of Marx's central arguments about political-economy tied in closely with his method. It would be a shame for anyone who claimed to be a Marxist to miss reading this.

Marx's method also involved reading a lot of science. In trying to understand something Marx would take things apart down to their smallest components. In the "Chapter on Money" Marx takes time to examine the relationship between gold and silver to other metals, which means discussing melting points and specific gravity. Marx's interest in science is well attested too, though rarely is it shown how this was an interest that existed throughout his life and was central to many of his own ideas.

I said that Marx had a enormous command of those who'd gone before him, or those writing on political economy in his own time. This awareness was also critical. The Grundrisse is full of references to Robert Malthus' work, Marx critiquing his economic ideas in detail and challenging Malthus on his ideas of population for reasons similar to those outlined above. Possibly because these are notebooks Marx describes Malthus as a "baboon" in relation to the latter discussion. But Marx's criticisms aren't reducible to pure name-calling. Much of the Grundrisse is an extended engagement with those who defend the capitalist system, but also with those who sought to understand it in order to change it - Proudhon for example.

Marx never loses sight of a wider vision of social transformation. Here for instance, he argues the reforming away of the capitalist system is impossible, but notes how capitalism contains the germ of an alternative way of organising society:


Although the private interests within each nation divide it into as many nations as it has ‘full-grown individuals’, and although the interests of exporters and of importers are antithetical here, etc, etc., national trade does obtain the semblance of existence in the form of the rate of exchange. Nobody will take this as a ground for believing that a reform of the money market can abolish the foundations of internal or external private trade. But within bourgeois society, the society that rests on exchange value, there arise relations of circulation as well as of production which are so many mines to explode it. (A mass of antithetical forms of the social unity, whose antithetical character can never be abolished through quiet metamorphosis. On the other hand, if we did not find concealed in society as it is the material conditions of production and the corresponding relations of exchange prerequisite for a classless society, then all attempts to explode it would be quixotic.)

Much later, he contrasts capitalism with the supposed "higher" societies of antiquity that did not begin from money and instead placed the human individual at the centre of society, and uses the argument to eviscerate bourgeois society.


Thus the old view, in which the human being appears as the aim of production, regardless of his limited national, religious, political character, seems to be very lofty when contrasted to the modern world, where production appears as the aim of mankind and wealth as the aim of production. In fact, however, when the limited bourgeois form is stripped away, what is wealth other than the universality of individual needs, capacities, pleasures, productive forces etc., created through universal exchange? The full development of human mastery over the forces of nature, those of so-called nature as well as of humanity’s own nature? The absolute working-out of his creative potentialities, with no presupposition other than the previous historic development, which makes this totality of development, i.e. the development of all human powers as such the end in itself, not as measured on a predetermined yardstick? Where he does not reproduce himself in one specificity, but produces his totality? Strives not to remain something he has become, but is in the absolute movement of becoming? In bourgeois economics – and in the epoch of production to which it corresponds – this complete working-out of the human content appears as a complete emptying-out, this universal objectification as total alienation, and the tearing-down of all limited, one-sided aims as sacrifice of the human end-in-itself to an entirely external end. This is why the childish world of antiquity appears on one side as loftier. On the other side, it really is loftier in all matters where closed shapes, forms and given limits are sought for. It is satisfaction from a limited standpoint; while the modern gives no satisfaction; or, where it appears satisfied with itself, it is vulgar.

Let's not pretend though that these arguments are easily accessible. The Grundrisse is one of those works where the reader ends up with notebooks full of quotes and points that encourage further thoughts, which is ironic as that is what the book itself was originally. When it came to Capital Marx took the Grundrisse and made it into a coherent and grounded argument (though the Grundrisse contains more than Capital does). While the Grundrisse does ring with his anger at capitalism and the bourgeoisie, it lacks the detailed, passionate critique of capitalism and its impacts on workers which often surprises readers of Capital. That said, all serious students of Marx will find much of interest here, though no one should approach the Grundrisse without being aware of the enormous challenges contained within.