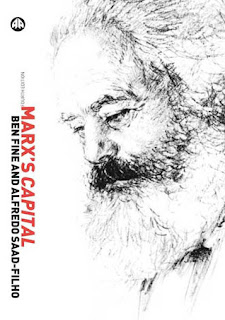 A decade after the financial crash that marked the start of the Long Depression, capitalism has still failed to recover. Economic crisis, poverty, austerity combine with a staggering concentration of wealth in the hands of a few individuals. It is no wonder then, that the ideas of Karl Marx remain of interest to many people trying to understand the capitalist system, and the two hundredth anniversary of Marx's birth is likely to encourage further interest.

Fine and Saad-Filho' guide to Marx's ideas has been in print, in various forms, since the 1970s. The text I've read is from 2004 and I understand it has been much developed since the early versions. The authors are two leading Marxists and have attempted to condense the key points of Marx's thought into this short book. I suspect it's popularity in no small part lies with its length - many of Marx's works and the guides to them are long, detailed books and this short volume offers an easy start.

The authors look at several key aspects of Marx's work - in particular his Method and the origins of his philosophy; the Labour Theory of Value, commodities; the circulation of capital and its accumulation and the role of the falling rate of profit in creating crisis. These are good introductions, and worth reading. Later chapters, particularly those on finance capital and agricultural rent are harder.

While there is much of interest here, in my opinion the book is too difficult to act as an entry to Marx's ideas. The early chapters are accessible, but by the middle of the book the authors appear to be addressing students with existing knowledge of mainstream economics. Because the book is not a guide to specific volumes of Marx's work in self-contained sections, the authors miss key sections. For instance there is no serious discussion of Marx's concept of money as a universal commodity - a key and very important section of the early chapters of Capital - It's omission makes some of the later explanations harder to understand.

Importantly the authors take up some contemporary criticisms of Marx, though readers who have not read these elsewhere will be left unsure of the arguments as the authors do not spend time in explaining Marx's opponents in detail. They also argue for the continued relevance of Marx, particularly his theory of class and the role of the state.

But there are weaknesses. I thought the section on Marxism and the environment missed some key arguments, not least even a passing reference to metabolic rift theory - despite referencing John Bellamy Foster's work. Of more concern was the author's argument that "capitalism is also capable, not least through the development of new materials and through state regulation, of tempering or even reversing at least partly such environmental degradation". This is an odd conclusion that doesn't really chime with Marx's arguments or those who have written in the field of ecological Marxism.

The section on the environment is from the author's concluding chapter on "Marxism and the Twenty First Century". They argue that the "purpose of this final chapter is to argue for the continuing salience of Marx's political economy for the study of contemporary issues". Here for me was the real problem - what is omitted is a sense of Marxism as a guide to political action, the ideological tools for the ending of capitalism and the building of a socialist society by the working masses. This felt like a retreat into an academic Marxism that explained the approach of the early chapters. So while there is much of use for those trying to get to grips with Marxism here, I'd recommend readers starting elsewhere. Some suggestions follow.