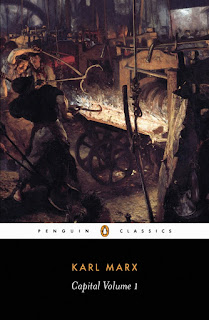 How can you write a review of Karl Marx's Capital? It is, after all, one of the most discussed books in the world, though I suspect that most of those who discuss it have never read beyond the introduction. It is much easier to write about why someone should read Capital - here it is quite simply that Marx's book is the clearest explanation of how capitalism works and what it does to those who labour and live in the system.

Reading Capital is a monumental task in itself. It is a big book, but not an impenetrable one. The first chapters are the most difficult because here Marx is outlining the basis of his explanation of how capitalism works, and without this the rest of the book does not hold together. That said, even these chapters are not impossible for anyone who has a grounding in basic Marxist economics, and to be honest, with lots of notes and careful reading these chapters are surprisingly accessible. I suspect that much of the fear that Capital is tough to read comes from the smokescreen created by Marx's enemies and those on the left who floundered and want to justify their own failure to complete the project.

At the centre of Marx's work is the role of people. Human's labour to change the world around them in their interests. Marx understands that this differs throughout history, through different "modes of production" but he begins with that fundamental fact, people create things through their labour.


Labour, then, as the creator of use-values, as useful labour, is a condition of human existence which is independent of all forms of society; it is an eternal natural necessity which mediates the metabolism between man and nature, and therefore human life itself.

Because people create things through their labour, the "value" of a commodity (under capitalism) depends on the amount of labour. Upon this basic fact many have found themselves confused - and here I was immediately struck by one aspect of how Marx writes Capital. Marx takes up the counter-arguments to defend his thesis. Here, for instance, is Marx explaining how the specific instance of labour was not what determines an individual commodities' value, but its part within a wider, social, set of relations.


It might seem that, if the value of a commodity is determined by the quantum of labour expended during its production, the more lazy- and incompetent a man the more valuable his commodity is, because he needs all the more labour-time for its completion. But only the socially necessary labour-time is labour-time required for the constitution of some particular use-value, with the available socially-normal conditions of production and the social average-level of competence and intensity of labour. After the introduction of the steam-driven loom in England, for example, perhaps half as much labour as before was sufficient to change a given quantum of yarn into cloth. The English hand-weaver needed in order to accomplish this change the same labour-time as before, to be sure, but the product of his individual labour-hour now represented only one half a social labour-hour, and sank accordingly to half its earlier value.

Here there are two other things on view. Firstly Marx is anticipating arguments against his theory, and offering a defence. Secondly that he is rooting his arguments (and defences) within empirical facts from capitalism's short history. The former is interesting in part because Marx was not writing for academics but in part for workers and revolutionaries, so he is thinking through how his ideas will be challenged by his enemies. The second demonstrates why Marx spent so much time in the British Library - he was finding evidence, looking for patterns and proving his points. Capital thus comes into being filled with empirical tables and data, which perhaps helps to put some readers off, but does underpin Marx's own arguments with referenced data. But it isn't simply facts. Marx also demonstrates an enormous level of knowledge about different industries, which allows him to show how capitalism develops, and what it does to the people who work. 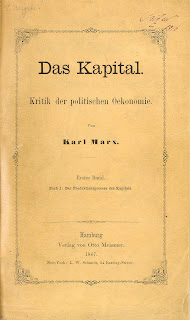 This brings me to an aspect of Capital that only really becomes obvious as you read it cover to cover. Marx is setting up an argument that flows through the book. He begins with the commodity because capitalism looks like an "immense collection of commodities". From here he takes the reader to the worker, labour and value. But then he quickly opens up wider fields. Early on (page 271 in my edition) he points out that a person can only sell their labour power if he has it at his disposal, thus "he must be the free proprietor of his own labour-capacity". An obvious point, that takes MArx through the social relations that capitalism creates, and how that affects workers' lives, but crucially one that also allows Marx around 700 pages later to discuss how it came to be that workers have the freedom to do this. This is the importance of Marx's latter chapters on "primitive accumulation" as they demonstrate how the capitalist system was created.

Marx's method in Capital is the subject of many brilliant articles and books. I was struck by how Marx argues his case. He makes a postulations, demonstrates its validity, examines it from all angles, tackles counter-arguments and then moves on, often returning to reiterate the point. Take the question of the commodity - he shows how labour creates things, and these things can be exchanged for quantities of other things, because they all have value as the are all the result of human labour and then he shows how one commodity could be a method of universal exchange, which leads him on to the reality of money. Thus money is not a theoretical idea introduced form outside, but one that flows out of the logic of Marx's method. Those radicals who you occasionally meet who say "we need to abolish money" need to read these chapters to understand the intrinsic nature of money to a system of commodity exchange.

But Marx's book is not a dry work of economics or philosophy. The foot notes are often full of dry jokes directed at those who Marx thinks inadequate. More importantly though the book drips with anger at what capitalism does to people. The famous chapters on "machinery" and the "working day" are full of details studies of the way that capitalism systematically immiserates people through its quest to maximise profit. Here's Marx on how factory labour dehumanises through its transformation of labour: "constant labour of one uniform kind disturbs the intensity and flow of a man's vital forces, which find recreation and delight in the change of activity itself." As Marx had argued years later, the nature of capitalist employment alienates humans from what makes them human - their labour. By contrast:


When the worker co-operates in a planned way with others, he strips off the fetters of his individuality, and develops the capabilities of his species.


Reading Capital again I was also reminded at how central the question of ecology (though Marx does not use that word) is to Marx's thought. In fact it runs, like a green thread, through much of the work - forming the context to Marx's explanation of human labour and finally, being a fundamental aspect to the question of primitive accumulation. 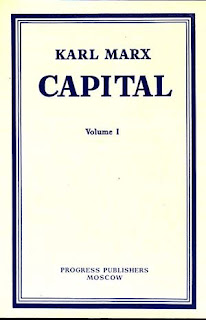 Capital is one of those books that deserves repeated reading. I haven't time to mention all of the subjects Marx tackles - from the role of the family to the question of parliament (the permanent trade union of the capitalists". While readers might point out that Marx's necessary focus on contemporary  capitalism means lots of discussion about the cotton industry, other aspects are frighteningly contemporary (eg his comments on the London housing market). Reader will also find something new on each occasion they read the book. This time I was reading in the aftermath of writing my book on class struggle in the countryside. I was struck by how fresh and modern Marx's work on the dispossession of the English peasantry felt.


It is not enough that the conditions of labour are concentrated at one pole of society in the shape of capital, while at the other pole are grouped masses of men who have nothing to sell but their labour-power. Nor is it enough that they are compelled to sell themselves voluntarily. The advance of capitalist production develops a working class which by education, tradition and habit looks upon the requirements of that mode of production as self evident natural laws.

In other words, the development of capitalism created a working class and then beat it into submission, and then makes it feel like capitalism is the natural way of things. Marx makes it clear that the working class have the power to transform society, precisely because of their centrality to the system. Nothing moves, functions, sells or buys without workers. Workers are also central to making sure the workforce is adequately educated and is healthy. But that gives the working class enormous power.

But because exploitation, and class struggle, are central to capitalism, workers can and will realise their power to change things. Workers will not lead a revolution against capitalism because they have all read Capital. But the socialist activists who will be an integral part of developing and shaping that revolutionary movement need to have the clearest understanding of how capitalism works, and Karl Marx's Capital is the clearest, and most detailed explanation of that system. All activists show read, and re-read, it.