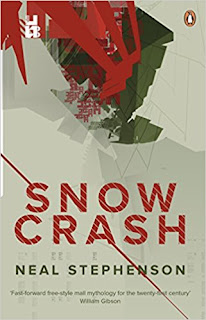 Snow Crash is one of the great works of science fiction that came out in the run up to the millennium. Alongside writers like William Gibson, Neal Stephenson pushed new boundaries that saw the potential for new technologies like virtual reality, but also recognised that society limited how those technologies would be used.

Snow Crash is notable for putting virtual reality at the heart of the story, and in some ways it probably works better now than it did in 1992. 25 years ago did anyone really think that it would be possible to enter a virtual world on your computer while travelling at high-speed along a motorway?

The brilliantly named Hiro Protagonist is sacked from his job delivering pizzas right at the start of the book. He's a hacker extraordinaire and quickly becomes involved in a complicated plot involving a corporate Mafia, a computer virus that can kill in the real world, and the interests of an extraordinarily rich private church. The characters are all larger than life and many of them poke fun at particular sub-cultures. The 15 year old Y.T. who is a kourier using her skateboard to surf through traffic via grappling hooks is brilliant. But even the minor characters, like the US President that everyone ignores, are well done.

The plot races along, in fact there are several dramatic chase scenes as Hiro and Y.T. try to get to the bottom of what is happening.

Despite being published in 1992 this dark comic novel of hacking and virtual reality set against a backdrop of a disintegrated United States has aged extremely well. In part that is because Stephenson doesn't spell out in to much detail the technology of the time. Technology has a way of developing far quicker than authors imagine and too much science fiction is blighted by characters using technology that sounded futuristic when it was written, but dated five years later. In fact the most fantastic technology in Snow Crash is the wonderful adaptive wheeled skateboard that Y.T. uses; and that's because its actually unworkable.

But what really makes the novel work today is that the trends that Stephenson has bigged up for comic effect in 1992 still seem eerily real. A United States were the Mafia have achieved corporate power and Fast Food delivery has become something done by low paid couriers racing against the clock, risking death as they go, doesn't seem that far off. The coding factory that Y.T's mum works in, where managers monitor every mouse click and time taken to read an email might have seemed like a dystopian future in the 1990s, yet today it's reality for millions of workers.

Snow Crash is a classic novel that retains much of its punch over a quarter of a century after its initial publication, but in someways seems even more relevant today. It would be churlish to compare this with Stephenson's absolutely superb Baroque Cycle, as they are completely different books, so whether or not you liked those as much as I did, you should try Snow Crash.