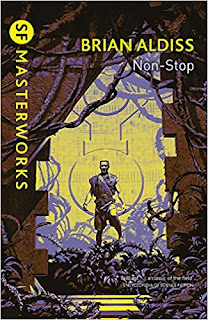 Brian Aldiss' Non-Stop is a extraordinarily fine science fiction novel that has barely dated since its initial publication in 1958. Since reading it I've discovered that it's subject matter - a generation star ship - was not uncommon at the time, and others had written similar stories. But few of those have the fame, or the lasting power of this book. The book is centered on Roy Complain, a hunter in the Greene tribe. It should spoil no future readers to know that his tribe appears to be all that is left of the humans on board a generation ship whose social order has broken down.

Roy is self-centered, rude and rebellious against the strict rules of the Greene tribe and, facing social demotion following the death of his wife, he leaves the safety of the tribe to explore the space-ship with a small band. Leading this group is the priest Marapper who has dreams of power and, having worked out the nature of their confinement, hopes to map it to the command centre and become the ruler of the ship.

The story follows the group as they explore and discover the reality of the ship. Aldiss tells a sparse story. His descriptions aren't detail, but allow the reader to fill in the gaps. It's probably for this reason that the book hasn't dated anywhere near as much as some 1950s novels. Only in a few places did I notice anachronistic technology described as though it was from the amazing future.

But the real story here is how the regression of a large group of people cope with their interaction with a highly technological environment. Aldiss paints a wonderful world where the ship's flora and fauna has got out of control, and where a hunter-gatherer community can survive by harvesting plants, hunting dogs and cannibalising what they find in locked rooms from their ancestors. Rather unwittingly Roy finds himself at the heart of a revolutionary movement against the ship's rulers, though he seems to be doing this mostly because he is attracted a woman he encounters. Unusually for a novel of this era, and fair-play to Aldiss, I was struck by the positive portraits of women. Roy's misogyny and that of the society he comes from causes some interesting clashes in his explorations.

It's a classic novel that no connoisseur of science fiction should fail to read.
Posted by Resolute Reader at 8:03 pm