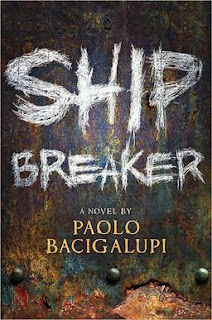 There seem to be no shortage these days of novels set in a future dystopian world ruined by environmental disaster. Paolo Bacigalupi's Ship Breaker stands out for me because it captures the lives of those who are at the bottom of the pile in a ruined world. Evoking the men and women who are ship-breakers in India today, dismantling vessels for scrap and materials, this book begins among the impoverished communities of the United States, similarly breaking up old ships (usually oil tankers) so the raw materials can be sold at vast profits by corporations.

Nailer is one of these workers, a young boy about to grow to large for his job of crawling through the dark passages of the wrecks and removing cable. His future is uncertain, and in addition, his father is a violent drug addict who abuses Nailer. Bacigalupi sets up his world well. Nailer stands on the shore gazing at the beautiful, wealthy clippers that move on the horizon, traders and pleasure craft that he cannot imagine. His world is poor, violent and frightening. Exposed to the brutal "city killer" storms that are one legacy of the warmed world.

Everyone Nailer knows is hoping for their lucky break - the chance to escape poverty. But for most that doesn't happen. Nailer's chance comes when a clipper and its wealthy passenger are wrecked nearby and Nailer has to return her to her family.

I didn't realise, when I picked this up from the library, that it was a young adult novel. It is still enjoyable but clearly aimed at a youthful audience, who will appreciate the pace and tension, as well as the brilliantly drawn relationships between the young characters. I also appreciated that many of the main characters are female and black, something that's unusual in novels, but also reflects the reality of those who currently live and will live on the fringes of an economy destroyed by climate change. There are some odd moments - for instance this future world appears to have lost all its radio and telephone communications ability - but this is a clever and thoughtful book that depicts a future far different from the shiny technological utopia climate denying politicians often promise.